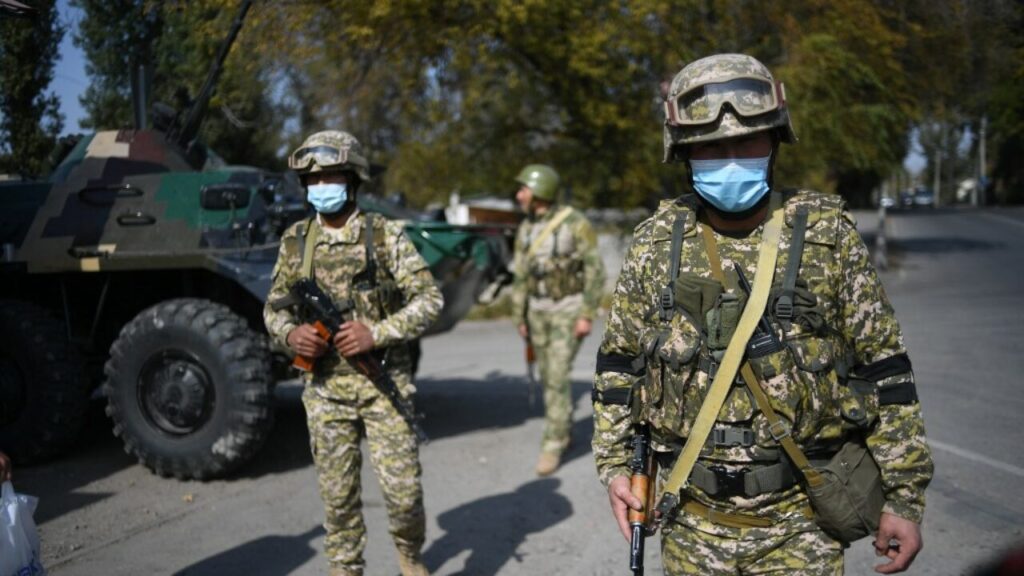 The Military conflict on September 14th 2022, on the border of two post-soviet countries- Kyrgyzstan and Tajikistan took lives of more than 90 people from both sides. “The Ministry of Foreign Affairs of Kyrgyzstan considers that the events which took place on September 14-17, 2022 necessary to state as a pre-planned armed act of aggression by Tajikistan against the sovereign state Kyrgyzstan. As a result of the inhuman actions of the Tajik side 59 citizens of Kyrgyzstan were killed and 140 were injured, about 140,000 people were forced to evacuate. But the Tajik officials and mass media actively accusing Kyrgyzstan of aggression and violation of non-attack agreements. Both sides blame each other for the outbreak of violence. As the Ministry of Foreign Affairs of Kyrgyzstan declared that the information of the Ministry of Foreign affairs and other authorities of Tajikistan did not correspond to reality. The Kyrgyz side has all the evidences (photo and video materials) that recorded the beginning of the aggression, as well as all the crimes committed by the Tajik military on the territory of Kyrgyzstan. If necessary, the Kyrgyz side is ready to provide this evidence.

The Kyrgyz-Tajik border 950 kilometers long. At the moment, Bishkek and Dushanbe have recognized only 520 kilometers of a common border, the rest of the sections since the collapse of the USSR are considered controversial and run along villages and roads.

The conflict has many aspects: here are territorial disputes, competition for the possession of water resources, and inter-ethnic problems. It is also associated with activities on the border of criminal structures, with smuggling, with drug trafficking. Radical religious organizations may also be involved in it. Therefore, all relations in the conflict zone between the Kyrgyz and Tajik sides are extremely aggravated. And the reason for the next clashes can be anything, any petty domestic situation.

In spring 2021 a similar bloody conflict took place on the border of two republics. As it turned out later, this escalation had domestic reasons. It was provoked by a dispute over the sharing of a water distribution point located between Kyrgyz and Tajik villages, which ended with a fight afterwards by killing each other by weapons. The state border between Tajikistan and Kyrgyzstan is 950 kilometers, and 520 km of it has not yet passed the demarcation procedures. Despite that the Central Asian states gained independence more than thirty years ago.

The reasons of the latest invasion of Tajikistan to the territory of Kyrgyzstan still not clear. What could be the reason of breaking the Agreement of non invasion? Why it started the same day of the Shanghai Cooperation Organization Summit? Why its happening after the Azerbaijan-Armenia conflict? Why Post-Soviet countries are in war with each other? Scholars and some officials have various assumptions about the latest bloody clash. “There are provocateurs and third forces.” – says the head of the government of Kyrgyzstan Akylbek Zhaparov.

The military conflict started the same date of the summit of the SCO in Samarkand. On September 14, the governments of China, Kyrgyzstan and Uzbekistan signed a long-anticipated  agreement to push ahead with construction of a railroad linking these countries that will  establish a shorter route to Europe bypassing sanctions-hit Russia. So according to some Kyrgyz officials the clashes on Tajik and Kyrgyz borders started after the signing of the agreement about the construction of the railway-plausibly as a warning about the discontent of Russia, which throughout the history of the Central Asian countries has tried to make the region as economically dependent as possible. Moreover the President of Tadjikistan Emomali Rahmon wouldn’t invade into territory of Kyrgyzstan without Putin’s support.

If the first group of people considering that two countries are in this battle because of Russian tactics, the second group of people like the Deputy of the State Duma of the Russian Federation Alexei Chepa noting that the cause of this conflict lies not only in unresolved disputes between the two countries. They suppose the external forces, primarily enemies of Russia, have decided to take advantage of the situation and create conflicts in the region. As they use the internal problems of Tajikistan and the conflict situation with Afghanistan, where the United States left a huge amount of weapons and a certain contingent of troops. And all this are aimed at using conflicts to further discredit Russia. We see this in the example of conflicts arising in Kazakhstan, Armenia and Azerbaijan and in some countries of the Caucasus.

This conflict would repeatedly escalate and next time would lead more death of civilians until the demarcation and delimitation of Kyrgyz-Tajik borders process would be finished and signed. This kind of military battles can lead to the unleashing of a large-scale interstate conflict, as well as to the destabilization of the situation in the Central Asian region as well.