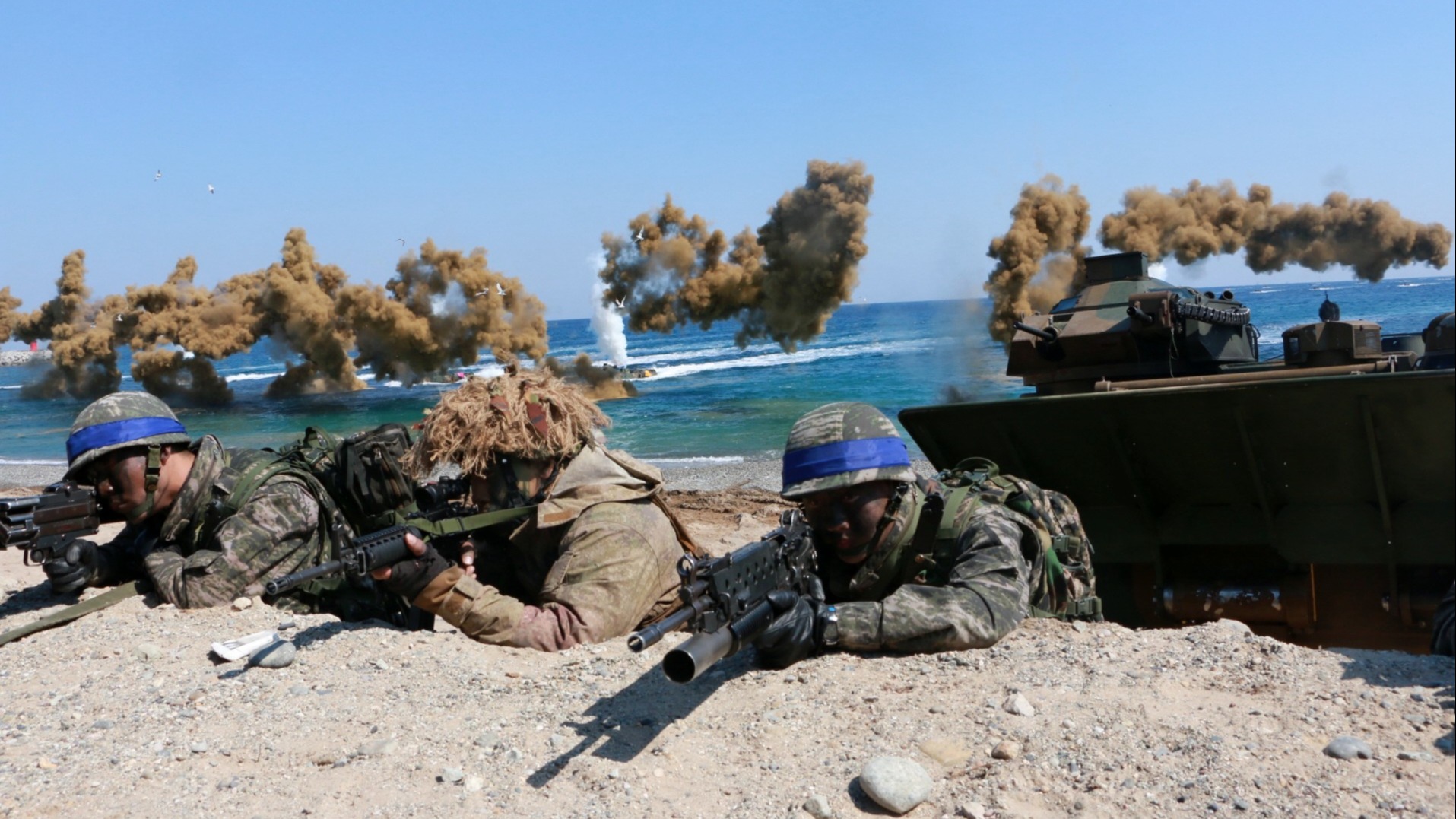 How a military commitment by Pyongyang could materialize.

Reports from a range of Russian sources and from the self-proclaimed Donetsk and Luhansk People’s Republics in eastern Ukraine have indicated that North Korea may deploy its armed forces for operations in the Ukrainian theater. Pyongyang recognized and formed diplomatic ties with the two breakaway republics on July 13, and it was reported just days later that North Korean workers would be dispatched to support reconstruction efforts in eastern Ukraine. The East Asian state would also potentially support and participate in war crimes tribunals in Donetsk.

Reports of plans to dispatch military personnel to Donetsk and Luhansk then emerged from the media outlets of the republics, before being more widely publicized on the Channel One Russia state TV channel.

Although yet to be confirmed, the possibility of North Korean forces being deployed in some capacity to Ukraine – albeit likely not as many as the 100,000 personnel that reports from the Donbas have claimed – remains significant based on prior trends in Pyongyang’s overseas force deployments and the benefits it, the contested republics, and Moscow itself could gain.

For North Korea, contributing forces to the Ukrainian war effort would be far from unprecedented, with the country’s armed forces having fought in Vietnam against the United States and in multiple Middle Eastern wars primarily against various U.S.-backed parties. North Korea has lent assistance to U.S. adversaries without frontline personnel contributions in multiple further conflicts, ranging from the South African Border War to the Iran-Iraq War. In the latter, Pyongyang provided the Iranian Army with the longest-ranged artillery in the region as well as the bulk of its ballistic missile arsenal. Should Pyongyang believe its forces can significantly influence the war’s course in Ukraine, it could go a long way toward keeping Western attentions focused on Eastern Europe, and thus away from East Asia, while further placing pressure on the United States, with which it remains officially at war.

Participation would also provide valuable experience combatting Ukrainian forces, which have received tens of billions of dollars’ worth of equipment from NATO and are operating with American intelligence, advisors, and training. Any North Korean deployment would likely be financed by Russia, potentially facilitating better access to Russian commodities, military hardware, and other economic support. Greater experience operating alongside Russian forces could also be highly prized due to the shared borders and common adversaries both face in East Asia.

Unlike China and Iran, which have taken officially neutral positions in the Russia-Ukraine War, undermining claims that either could provide drones or other equipment to the Russian military, North Korea has strongly sided with Moscow. Alongside Eritrea, Belarus, and Syria, North Korea was one of four foreign countries to vote against condemning Russia’s military intervention at the United Nations. The country may thus be the only source of foreign arms available to Russia other than Belarus, as other than China and Iran North Korea is one of the few countries outside the Western sphere of influence with a sizable defense sector capable of providing significant benefits to Russian forces.

While Beijing and Tehran are both currently pressing to improve ties with the Western world, North Korea has seen a much harder line taken against it for decades by Western countries, and Pyongyang is so heavily sanctioned that there is far less to lose from supporting the Russian war effort and strengthening ties with Moscow and the Donbas. The possibility that this could help pave the way for greater economic integration with Russia, thus undermining Western efforts to isolate both economies, also remains significant.

Economic ties with Donetsk and Luhansk may also provide a range of important opportunities. Since the breakaway regions are not U.N. member states, neither will be obliged to follow U.N. Security Council resolutions sanctioning North Korea – leaving them among the only territories in the world with which the East Asian state would be able to trade freely. Provision of a wide range of North Korean goods and services, ranging from expatriate workers to artillery systems, would not be prohibited as it would to U.N. member states such as Russia.

North Korea’s special forces, army, and possibly some parts of its artillery forces are notably larger than those of Russia, and its much greater emphases on several specific areas of ground warfare have since the Cold War led it to eclipse the Russian military in a number of key capabilities. A notable example, first highlighted on July 23, are its rocket artillery systems namely the KN-09 and KN-25 which both have longer ranges than any foreign rival outside China. They boast several times the range of either their Russian counterparts or the U.S. HIMARS, which have caused significant issues for Russian forces since being recently supplied to Ukraine.

Speaking on Channel One Russia, host Igor Korotchenko was among those to indicate that North Korean artillery systems in particular could be of value in Ukraine and may be deployed to the front, stating: “If North Korean volunteers with their artillery systems, wealth of experience with counter battery warfare and large caliber multiple launch rocket systems, made in North Korea, want to participate in the conflict, well, let’s give the green light to their volunteer impulse… If North Korea expresses a desire to meet its international duty to fight against Ukrainian fascism, we should let them.”

North Korean artillery officers have already operated alongside the Syrian Army in the Lebanon War and in counterinsurgency operations in the 2010s, and could be among the first personnel deployed to eastern Ukraine. Their impact would be particularly significant if deploying alongside indigenous artillery systems, which could reach the Donbas through Russian territory.

Aside from artillery units, North Korean special forces units could potentially play a key role in Ukraine following their reported deployment for counterinsurgency operations in Syria. North Korea field the largest special forces in the world with estimates ranging from 180,000–200,000. They have been described in British assessments as “highly motivated, politically well indoctrinated and well trained…. units are expected to seek the initiative continuously, to turn all unforeseen events to their advantage, and advance all to achieve their objectives regardless of cost.” Two North Korean special forces units deployed to Syria in the 2010s were described by leaders of the insurgency they were targeting as “fatally dangerous” on the battlefield. Trained to operate behind enemy lines against adversaries far better equipped and trained than the Ukrainian Army, their deployment could have a significant impact on the battlefield depending on how effectively they can be integrated with Russian and Donbas units.

References to North Korean personnel set to join the front as “volunteers” indicates that deployments may not be made officially under the Korean People’s Army – the country’s armed forces – potentially mirroring China’s prior intervention in the Korean War, when Beijing dispatched forces under the People’s Volunteers rather than the Chinese People’s Liberation Army. This could similarly be intended to avoid placing North Korea officially at war with Ukraine and its foreign backers.

Personnel deployments will nevertheless pit North Korean forces directly against those of the U.S. and other Western powers, with the New York Times having referred to the U.S. as setting up “a stealthy network of commandos and spies rushing to provide weapons, intelligence and training” within Ukraine’s borders. “C.I.A. personnel have continued to operate in the country secretly, mostly in the capital, [Kyiv], directing much of the massive amounts of intelligence the United States is sharing with Ukrainian forces,” the Times continued.

“Commandos from other NATO countries, including Britain, France, Canada and Lithuania, also have been working inside Ukraine… training and advising Ukrainian troops and providing an on-the-ground conduit for weapons and other aid,” it added, stressing the sheer “scale of the secretive effort to assist Ukraine that is underway.”

The extent of the presence and operations of Western forces in Ukraine was more recently highlighted in a report by the French magazine Causeur, citing intelligence sources from the country, while Russian government sources have consistently alleged an even deeper level of Western involvement in frontline operations. The result could well be direct clashes between North Korean and Western personnel, with the former officially operating as volunteers and the latter as part of a “stealthy network” in supporting roles or as military contractors.

North Korean and U.S. forces have fought on opposite sides of multiple conflicts in the past, most recently in Syria. Ukraine is potentially the latest of many wars, and one of the largest in terms of North Korean contributions, where the two have faced off as part of their ongoing 70-year conflict.

Russia’s War on Ukraine: Six Months of Lies, Implemented
What China’s shifting relationship with Western media says about its ambition in Taiwan and the South China Sea
Comment