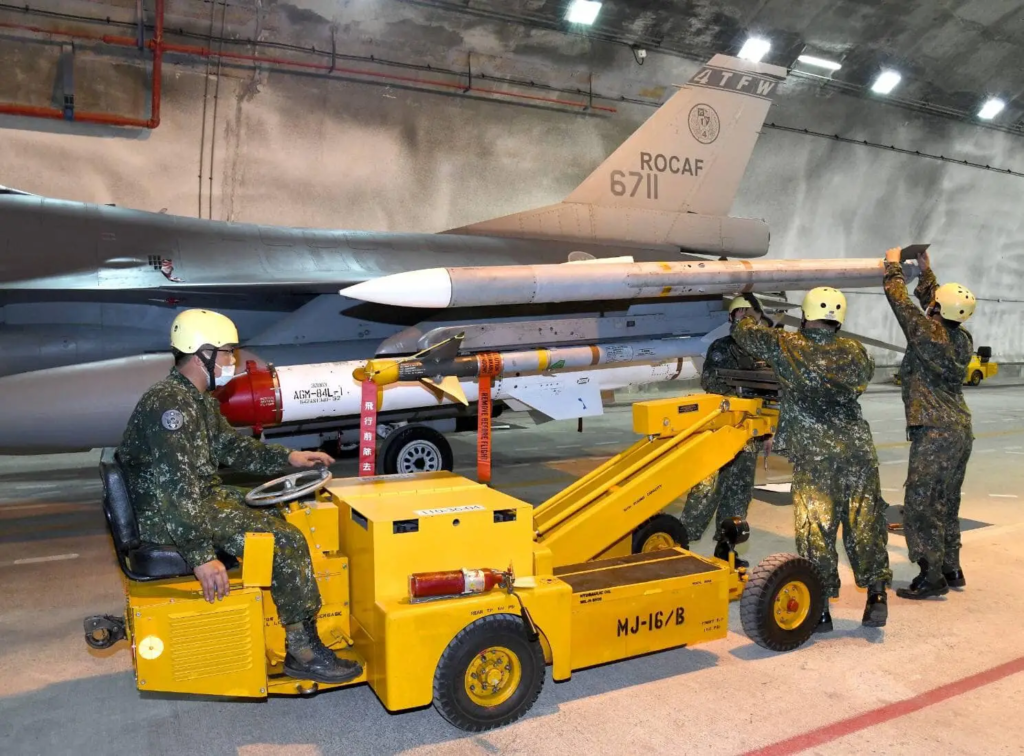 The Taiwanese Air Force, also known as the Republic of China Air Force, or ROCAF, has uncharacteristically released photos of weapons loading operations that were carried out in the highly-fortified underground cave-like complex connected to Chiashan Air Force Base. The photos offer a very rare look inside the subterranean tunnel network that houses some of the ROCAF’s most capable fighter jets, including the recently upgraded F-16V Viper that can be seen in the images being armed with Harpoon anti-ship missiles.

The ROCAF posted a photo set of the weapons loading exercise on Facebook this morning, writing that the practice is related to day two of the annual military Han Kuang Exercise. A rough machine translation of the post elucidates that the subjects in the photos, who are said to be part of the ROCAF’s 5th Tactical Composite Wing, were demonstrating their ability to both replenish an aircraft’s ammunition and ready it for takeoff in a particular timeframe. While the official ROCAF post doesn’t name the specific aircraft used during the exercise, an F-16 Viper is clearly the platform being armed.

In terms of the firepower being loaded onto the fighter in the photos, an AGM-84L Harpoon anti-ship missile is seen in a couple of the images which would line up with the live-fire drills that were scheduled for day two of the country’s Han Kuang combat readiness exercise. Taiwan is a major user of the Harpoon. AIM-120C Advanced Medium-Range Air-To-Air Missiles (AMRAAMs) are also seen being fitted to the F-16’s wingtips along with AIM-9L/M Sidewinders beneath the wings. The brown and yellow stripes also signify that the rounds are live, as blue stripes are used for inert munitions.

What’s most notable about the photos, however, is the location in which they were captured. Built into the mountainside near Chiashan Air Force Base in Hualien is a network of tunnels that lead to fortified underground hangars that serve as a sanctuary for some of the ROCAF’s fleet of fighter jets. Because of the secretive nature of the structure, the Taiwanese military has tightly controlled both who is granted access to the facility and who is allowed to snap pictures inside of it.

Why the Taiwanese military decided that these specific photos were safe to share on the world wide web isn’t immediately clear, but it’s difficult not to see how releasing these pictures could send a message about the measures available to the ROCAF to resist an initial wave of Chinese attacks if a conflict with the country were to unfold. It is also important to note that there hasn’t been an official identification of the location directly from the Taiwanese military. Although, defense journalist and author of Modern Taiwanese Air Power Roy Choo took to Twitter to echo the reports claiming that the photos were taken in Chiashan’s underground hangars.

In Choo’s book, he wrote that Chiashan is one of two such ‘sanctuaries’ built on Taiwan’s east coast, with the other being the smaller Shizishan facility at Chihhang Air Base in Taitung. Originally conceptualized in the early 1980s, the two bases were developed under Project Jian’an III which translates to Build Safe 3 after a seven-man engineering team ostensibly traveled across Europe beginning in 1981 to research the New Austrian Tunnelling Method (NATM) later used to begin excavating the underground facility.

Choo explained that construction on Chiashan officially began in 1984, took eight years to complete, and racked up a total cost of about $1 billion. Being that Chiashan was built by hollowing out a granite mountain in Hualien, thereby surrounding it with the rest of Taiwan’s Central Mountain Range, officials involved in the development process were confident that its location would ensure the underground hangar system could survive aerial attacks emanating from the Chinese mainland.

“Individuals who have visited the base have spoken of massive steel blast doors at the entrances that could withstand the shock of a potential hit,” wrote Choo. “According to them, the base comprises a northern and southern complex, each made up of five horizontal and five vertical tunnels interlaced together in a criss-crossed fashion. The taxiway tunnels reach up to a height of about three stories.”

Choo additionally touched on how certain media reports over the years claimed that the facility can hold up to 200 fighters, a number of underground power generators, medical facilities, C2 infrastructure, and several months’ worth of food and fuel supplies.

It is also worth mentioning that the Chiashan Air Force Base base was intentionally built on the island’s Pacific-facing side to help shield it from incoming attacks originating from the mainland. However, in recent years, China’s People’s Liberation Army has drastically expanded its abilities to strike from that side, as well, which has clearly raised new concerns about the vulnerability of installations, even hardened ones.

China possesses fearsome striking power from the land, sea, and air that could be brought to bear in a conflict, and concerns surrounding that fact have been further exemplified by Taiwan’s efforts to expand its land-based point defense systems. Weapons like the Phalanx rapid-firing gun along with others could protect the Chiashan Air Base, as well as Taiwan’s pacific-facing Jiashan and Taitung Air Bases, from various Chinese attacks including land-attack cruise missiles, drone swarms, or anti-radiation missiles. The reality is that even traditional Chinese tactical airpower can now strike from the east with the aid of aerial refueling. China’s aircraft carriers are also a large problem for Taiwan in this regard.

Despite the recently released photos offering only a glimpse into Chiashan Air Base’s underground tunnels and not its smaller Shizishan counterpart, both facilities would play an important role in a potential conflict with China. In his book, Choo explained that the ROCAF intends to evacuate the main portion of its fleet to the two hardened bases if cross-strait tensions with the mainland are to boil over. In fact, exercises meant to establish the procedures required by a hostile invasion are a typical aspect of the yearly Han Kuang wargames as can be seen in the photos shared by the ROCAF.

The appearance of the Harpoon, though, is especially significant as the ROCAF has used F-16s armed with live Harpoons in the past to conduct air patrol missions as noted in this War Zone article. Taiwan’s Liberty Times admitted that the missions were launched in response to Chinese exercises intended to simulate the capture of the Taiwan-administered Dongsha Islands. During a conflict with China, Taiwan would do whatever it could to resist such amphibious assaults, which could include the deployment of Harpoon-armed F-16s from their coastally located underground hangars. According to Choo, even more fortified jet sanctuaries are currently in the works, as well. This makes sense as these facilities are now far more vulnerable than before due to China’s aforementioned rapidly evolving arsenal of weaponry, which also includes advanced cruise and especially ballistic missiles that have serious fortified structure penetrating capabilities.

“Thirty-six protective shelters, designed to take the direct impact of a 2,000 lbs bomb, are being built at CCK Air Base over a seven-year period from 2020 at a cost of US$157 million,” Choo wrote. “It is expected that new hardened aircraft shelters will also be built at Chihhang Air Base, which has been identified to receive new F-16C/Ds from 2023.”

If an all-out conflict with China is to occur, the opportunity to house pivotal aerial assets in protective underground tunnels could certainly increase the fleet’s survivability. Needless to say, the ROCAF and the Taiwanese military as a whole do not appear to be shying away from highlighting their efforts to prepare for the worst.