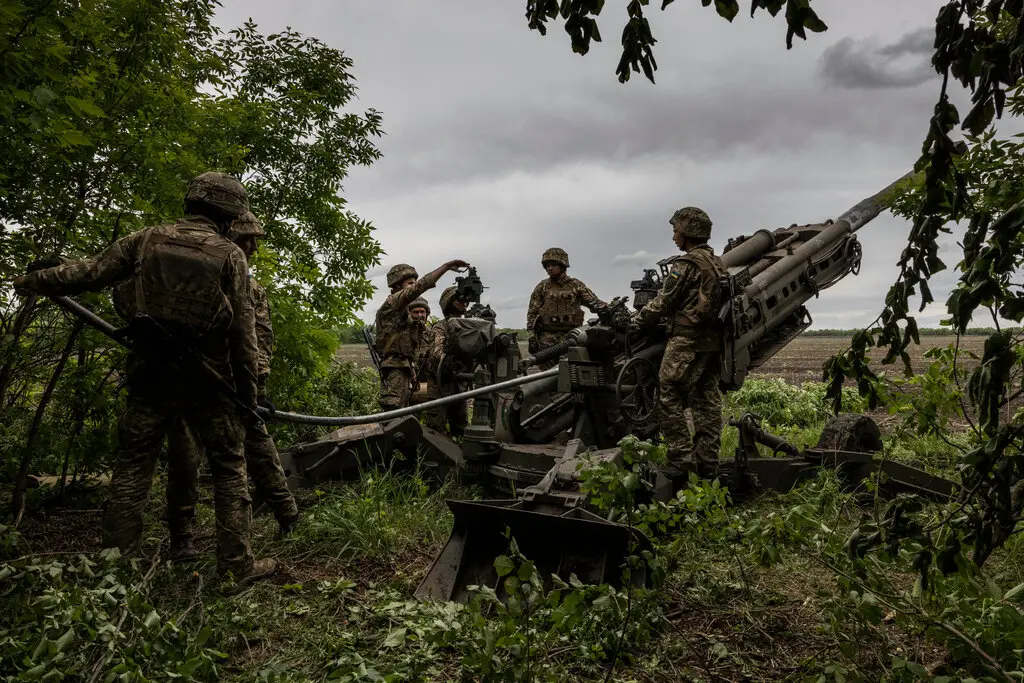 It takes a village to help Ukraine fight the Russians.

Consider a recent shipment of 105-millimeter howitzers. Britain donated the weapons, and New Zealand trained Ukrainian soldiers how to use them and provided spare parts. The United States supplied the ammunition and the vehicles to tow them and flew the load to a base near Ukraine’s border.

Choreographing the sequence was the job of dozens of military logistics specialists ensconced in a large, secure attic room at the U.S. European Command headquarters in Germany. The little-known group is playing a pivotal role in keeping the Ukrainian military armed and equipped as its battlefield needs become more complicated.

Think of the cell as a cross between a wedding registry for bombs, bullets and rocket artillery, and a military version of FedEx. Uniformed officers from more than two dozen countries try to match Ukraine’s requests with donations from more than 40 nations, then arrange to move the shipments by air, land or sea from the donor countries to Ukraine’s border for pickup. All within about 72 hours.

As the brutal five-month-old war appears to be edging closer to a new phase — with Ukraine laying the groundwork for a major offensive in the country’s south — Ukrainian political leaders and commanders are pressing the United States and its other allies to accelerate and broaden the flow of arms and munitions.

“Ukraine needs the firepower and the ammunition to withstand its barrage and to strike back at the Russian weapons launching these attacks from inside Ukraine’s own territory,” Defense Secretary Lloyd J. Austin III said last week in Washington. “And so we understand the urgency, and we’re pushing hard to maintain and intensify the momentum of donations.”

More American-supplied weapons like the High Mobility Artillery Rocket Systems, or HIMARS, are at the top of Ukraine’s wish list. But so are armed drones and fighter jets. Gen. C.Q. Brown, the Air Force chief of staff, suggested last week that the United States or one of its European allies could send fighter jets to Ukraine in the coming weeks or months.

“This has significantly slowed down the Russian advance and dramatically decreased the intensity of their artillery shelling,” Ukraine’s defense minister, Oleksii Reznikov, said in an online interview last week for the Atlantic Council, a Washington research group. “So it’s working.”

Admiral Heinz said the cell was trying to meet Ukraine’s demands for more weapons faster, and acknowledged that “if the roles were reversed, then the comments would be the same.”

The weapons distribution nerve cell, formally called the International Donor Coordination Center, is where it happens. For such a high-profile mission, the room has a distinctly bare-bones feel. Officers sit at long folding tables, tapping on their laptops or conversing on phone headsets with colleagues in several different languages.

Like much of Europe that suffered through last week’s heat wave, the attic room has no air-conditioning. Just a few open ceiling windows offered a faint breeze.

The center started its round-the-clock operations in March, combining British and American efforts to coordinate the flow of weapons and equipment. The process is straightforward. Ukraine submits requests through a secure, classified database. Military officers peruse the online list to determine what their countries can donate without jeopardizing their own national security. Nations also contribute training and transportation. A Ukrainian three-star general working in the center answers questions and clarifies his country’s priorities.

The center can send a technical team — a military version of the Geek Squad — to check the condition of a donor’s potential contribution and help arrange the paperwork for its delivery. Once a match is approved, planners find the best way to deliver the shipment.

About 75 percent of the arms are sent to staging bases in Poland, where Ukrainian troops pick up their cargo and take it back across the border. Admiral Heinz declined to identify two other neighboring countries where shipments are delivered, citing security concerns by those nations. The planners use different border crossings into Ukraine for weapons and for humanitarian assistance, he said.

In nearly five months, the center has moved more than 78,000 tons of arms, munitions and equipment worth more than $10 billion, U.S. and Western military officials said.

Many Baltic and Eastern European countries have donated Soviet-standard weapons and ammunition that the Ukrainian military has long used. But given the intense fighting, those stocks are running low, if not already depleted. One factory in Europe is making some Soviet-standard munitions, including howitzer shells, and it is operating 24/7, Admiral Heinz said. The shortage has required Ukraine to begin transitioning to Western-standard weapons and ammunition, which are more plentiful.

Once the weapons are in Ukraine, U.S. and other Western military officials say they are not able to track them. They rely on Ukraine’s accounts of how and where the arms are used — although U.S. intelligence and military officials, including Special Operations forces — are in daily contact with their Ukrainian counterparts, U.S. officials said.

American and Ukrainian officials have downplayed reports that some weapons are being siphoned off on the black market in Ukraine, but Admiral Heinz acknowledged that “we are not serial-number tracking these once they go across the border.”

Russia has attacked Ukrainian train depots and warehouses but has not shown it can effectively strike moving targets — like weapons convoys — with its rapidly diminishing arsenal of precision-guided munitions, American officials said.

The initial shipments of weapons, including Stinger antiaircraft and Javelin antitank missiles, were flown into Poland and quickly shuttled across the border. But as larger, heavier and more complex weapons are donated, the military planners also send shipments by sea, rail and truck.

The center also arranges for Ukrainian solders to be trained on how to use and maintain the weapons, like the HIMARS, which requires at least two weeks of instruction, military officials said.

The United States has trained about 1,500 members of the Ukrainian military, largely in Germany. A group recently arrived in Britain to attend a new program that officials there say will ultimately train as many as 10,000 Ukrainian recruits in weaponry, patrol tactics, first aid and other skills.

When the Ukrainians run into a problem, “tele-repair” sites set up by the center can help keep equipment running and check the maintenance status of weapons.

Shifting to this all-inclusive program of equipping, training and sustaining the flow of weapons, and synchronizing the shipments with training, has posed growing challenges to the coordination center.

“It’s definitely a more complex task,” said Brig. Christopher King, the top British officer in the center. “What I would say is they are very easy to train and very committed.”

The coordination center typically works on shipments two months out, Admiral Heinz said. In addition to the weapons and ammunition the Pentagon announced last week — the 16th round the Biden administration has approved since August 2021 — Admiral Heinz said that two more shipments — No. 17 and No. 18 — are in the pipeline.

The admiral did not provide details of the future shipments, which will require President Biden’s approval.

For now, senior officials say the allies are standing firm behind Ukraine’s fight.

“The goal is for Ukraine to win the right to defend the sovereignty of their country, and to regain that ground,” said Admiral Heinz, an Afghan and Iraq war veteran.

“I can’t define what winning looks like for the Ukrainians,” he said, adding that was up to President Volodymyr Zelensky and the Ukrainian people. “The United States and our allies and partners are in it until he tells us he doesn’t need any more help.”