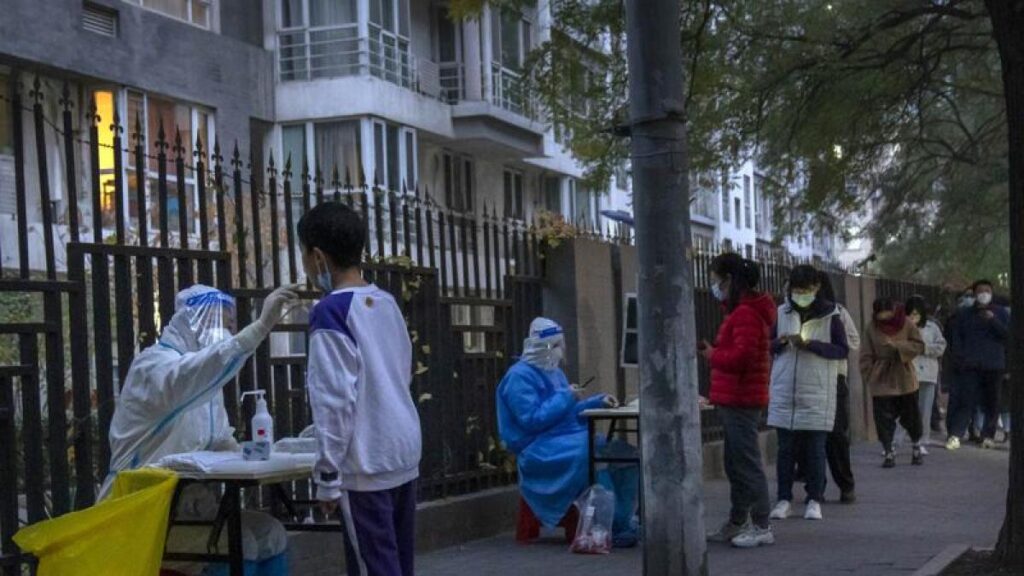 BEIJING: China on Friday (Nov 11) eased some of its COVID-19 rules, including shortening quarantines by two days for close contacts of infected people and for inbound travellers, and removing a penalty for airlines for bringing in too many cases.

The loosening of curbs, a day after President Xi Jinping led his new Politburo Standing Committee in a meeting on COVID-19, cheered markets even as many experts warned that the measures were incremental and reopening probably remained a long way off.

China will also stop trying to identify “secondary” contacts – a major annoyance for residents of cities who are caught up in sweeping contact-tracing efforts when a case is found – while still identifying close contacts.

China’s yuan currency extended gains to a seven-week high after the news and the blue chip CSI 300 Index rose 2.8 per cent in afternoon trade, while Hong Kong’s Hang Seng Index jumped more than 7 per cent, its biggest daily gain since March.

The easing comes even as case numbers in China surge to their highest since April, with Beijing and the central city of Zhengzhou seeing record tallies, and numerous cities widened localised lockdowns and other measures, including in the southern metropolis of Guangzhou.

But Bruce Pang, chief economist at Jones Lang Lasalle, said some interpretations of the new rules and what they might mean for prospects for a full opening were “too optimistic”.

“The COVID policy will only be fine-tuned in the short term,” he said.

The news was greeted with both excitement and wariness among Chinese citizens fed-up with nearly three years of COVID-19 curbs, which are also taking a mounting toll on the world’s second-largest economy.

“It depends on how the localities execute. I’m afraid to be optimistic,” said one user on the Weibo social media platform.

Still, the measures were China’s most significant specific COVID-19 easing steps to date, and were widely seen as a milestone.

“This set of substantial changes marks the beginning of the end of Zero-COVID, in our view,” Citi analysts wrote. “We expect the preparation work for full reopening to accelerate with a quick ramp-up of booster vaccinations in the coming months.”

The NHC said it would develop a plan to accelerate vaccinations, which experts say is crucial before the country can begin more fully dialling-back a zero-COVID policy that has made China a global outlier.

Among the new measures is an adjustment of categorisation of COVID-19 risk areas to “high” and “low” – eliminating a “medium” category in an bid to minimise the number of people caught up in control measures.

The new steps include ending a “circuit breaker”, under which airlines faced a suspension of flights if they brought in too many COVID-infected passengers, a system that caused frequent cancellations. Still, international flights remain at a small fraction of pre-COVID levels.

“It is a baby step in the right direction,” Joerg Wuttke, president of the European Union Chamber of Commerce in China, said of the new rules.

“But the big question looming over all of us is when is China ready to actually start a vaccination campaign that gives them the herd immunity to really open up the country?”

Many experts say China is unlikely to begin reopening until after the March session of parliament, at the earliest.

This week, cities across China imposed tighter control measures as case numbers surged, although they are low by global standards.

Authorities reported 10,535 new domestically transmitted cases for Thursday, the most since Apr 29, when Shanghai was battling its most serious outbreak under strict lockdown.

The city of Guangzhou – a manufacturing and transport hub – reported 2,824 new local cases for Thursday, the fourth day in which infections exceeded 2,000.

At least three of Guangzhou’s 11 districts have been put under some sort of restriction, and the city’s Haizhu district extended a lockdown until Sunday.

“Only one person in each household is allowed to buy daily necessities on a staggered schedule,” the government of the district of 1.8 million people said.

However, Guangzhou also said it would immediately release “secondary” contacts from quarantine, under the new rules.

Zhengzhou reported 2,988 new cases, more than doubling from a day earlier, in a widening outbreak that has sparked chaos at an iPhone assembly plant of Apple supplier Foxconn.

In the southwestern metropolis of Chongqing, cases hit a new high of 783 on Thursday. Some districts on Friday banned restaurant dining and some subway stations were closed.

Beijing reported a record 118 new domestic cases for Thursday, with some parts of the city urging daily testing for three more days. Some Beijing areas have barred entry to public spaces including offices, leisure venues and fitness centres.