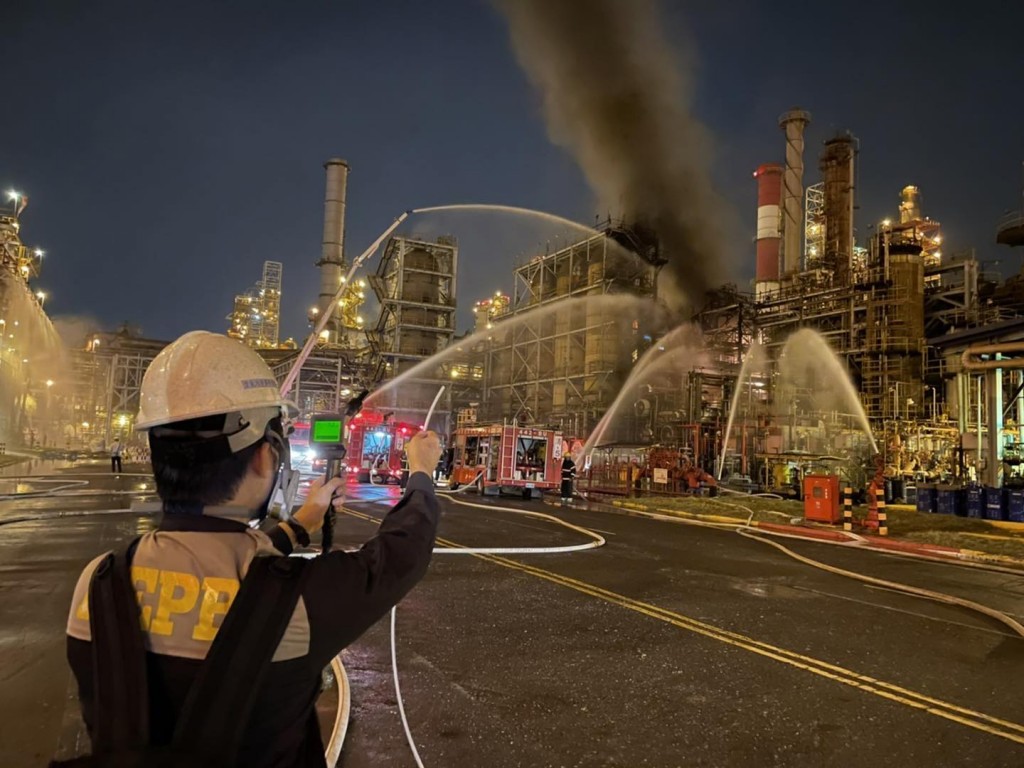 Fire breaks out at refinery in Taiwan’s Kaohsiung

TAIPEI — A fire broke out at the CPC Corporation’s Dalin Refinery on Thursday evening (Oct. 27) sending a large plume of smoke into the sky, prompting Kaohsiung Mayor Chen Chi-mai (陳其邁) to say the city will impose a NT$5.3 million fine.

At 10:35 p.m., the Kaohsiung City Government Fire Bureau received news that a fire had broken out at the Dalin Refinery on Zhonglin Road in Kaohsiung’s Xiaogang District. The fire department dispatched 26 vehicles and 49 firefighters to the scene, who were able to bring the blaze under control by 11:42 p.m.

Chen arrived at the scene 11:35 p.m. to assess the situation and told media that because the No. 3 heavy oil hydrodesulfurization plant was undergoing annual repairs, pressurized hydrogen burned during the process, resulting in residual gas combusting inside the pipeline. Chen said the gas that combusted was hydrogen, without hydrogen sulfide.

The fire has now been contained and there are no safety concerns. However, according to standard operating procedure, it is necessary to carry out residual fire combustion and burn off the residual oil and gas in the pipeline before the fire can be fully extinguished, Chen said.

Chen was cited by CNA as saying that following a preliminary inspection, no one was believed to be injured or trapped and the underground industrial pipeline does not appear to be affected. He said the Pipeline Safety Office of the Economic Development Bureau will continue to monitor the situation

The mayor pointed out that in response to this accident, both the Kaohsiung Labor Affairs Bureau and the Kaohsiung City Government Environmental Protection Bureau (EPB) will impose heavy penalties for the incident and require the No. 3 heavy oil hydrodesulfurization plant to be completely shut down for inspection. Chen said that work will not be permitted to resume until the plant’s operations are deemed to be safe.

Chen said the EPB will issue a fine of NT$5 million and the Labor Affairs Bureau will levy a fine of NT$300,000. He called on the CPC Corporation to conduct a serious review to ensure safety and he noted that nearby residents had expressed lingering fears resulting from past incidents.

The EPB said the Dalin Plant has committed four violations over the past year, including illegal operation of the combustion tower, leaks of equipment components, accidental fires, and large amount of black smoke generated from an explosion on the site. It said that there are currently no abnormal environmental readings at the site but added it will continue to monitor the air quality at the site and areas downwind.