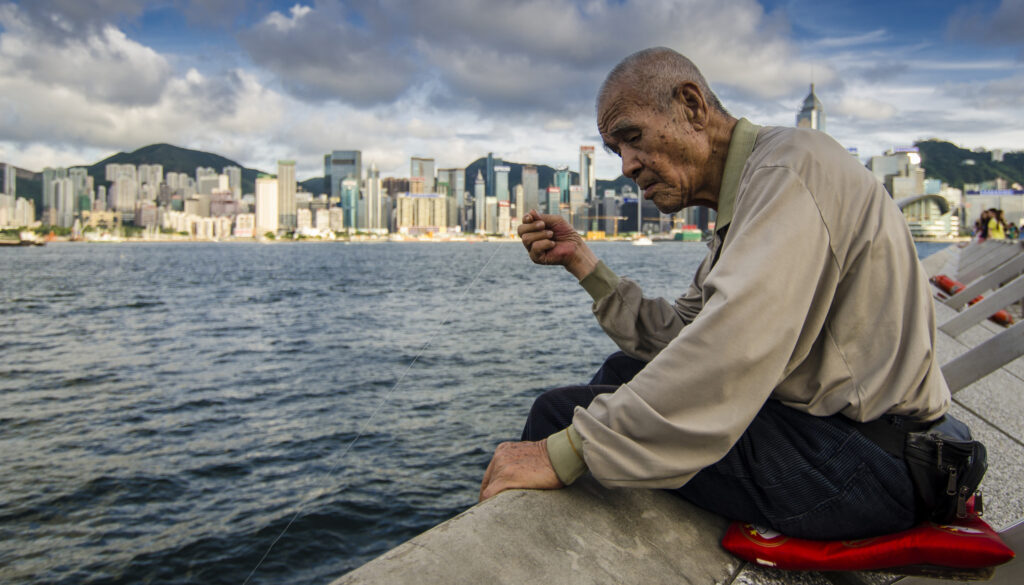 “I hope people can realise how much ethnic minority history there is in Hong Kong… it’s an important part of Hong Kong,” said Hadia Saqib, who helped translate recordings for an audio-guided walking tour of places of significance to the city’s ethnic minority groups.

With its high ceilings and cavernous halls, Kowloon Mosque is a Tsim Sha Tsui landmark – and quite a contrast to the one-room place of worship where Hadia Saqib spent her afternoons while growing up.

The Pakistani-Hongkonger used to attend the tiny mosque – in a building near her Kwun Tong home – almost every day after school when she was a primary student. There, together with other Muslim children, she learnt to read Arabic and recite the Quran.

“Going to the mosque was one of my best memories growing up,” Saqib, now a third-year student at the Education University of Hong Kong, told HKFP.

The 20-year-old no longer attends the masjid of her childhood but visits Kowloon Mosque a few times a year for festivals and special occasions.

The white-marbled structure is one of dozens of spots on an audio-guided walking tour – available in Cantonese and English – created by Hong Kong Unison, an NGO which supports the city’s ethnic minorities. The tour, called Diverse.City, invites the public to learn about places of significance to the city’s ethnic minority groups by listening to recordings on an app.

Saqib, who is fluent in Cantonese, was among the volunteers who translated the recordings from English to Chinese. The audio was narrated by social worker Jeffrey Andrews and comedian Vivek Mahbubani, both of whom are of Indian descent, as well as local celebrities and ethnic minority youth.

‘An important part of Hong Kong’

Despite its status as an international hub, Hong Kong is a largely homogenous city – only 8.4 of the population is non-Chinese, census figures released last year show. The two largest non-Chinese groups were Filipino and Indonesian – the nationalities of many of Hong Kong’s 340,000 migrant domestic workers – followed by Indian, Nepalese and Pakistani.

Rights groups have long campaigned to raise awareness of the challenges that ethnic minorities face, from a lack of support in learning Chinese at school to discrimination in the workplace. Government officials themselves have been accused of racism.

Last year, when Covid-19 broke out in neighbourhoods with large ethnic minority populations, a comment from a health official that ethnic groups “have many family gatherings and like to gather with fellow countrymen” drew ire.

Saqib said her own experiences with racism in Hong Kong have been few and far between, something she attributes partly to her fluency in Cantonese. But she will never forget the time she took part in a charity flag day event as a Form Five student.

She was standing on the street with her Chinese friend when a mother with two children approached them. The children went to her friend instead of her, and upon telling them that they could put coins in her collection bag too, one of the kids replied: “I don’t want to buy a flag from a black person.”

“I was really taken aback. It was my first direct experience with racism and it was [from] a kid,” Saqib recalled. “The thing that struck me was the mother was embarrassed and apologetic, but she didn’t ask the daughter to apologise.”

“I hope people can realise how much ethnic minority history there is in Hong Kong. A lot of places were founded and built by ethnic minorities. It’s an important part of Hong Kong,” Saqib said.

First established in 1892 by the Muslim garrisons serving with the British Army, the Kowloon Mosque was relocated to its present site on Nathan Road in 1984, according to the landmark’s website.

These spots are not merely places hidden away in the outskirts of the city, Saqib added. “Like Kowloon Mosque. It’s in the middle [of Tsim Sha Tsui]. It’s right next to the MTR station.”

The Tsim Sha Tsui route also includes stops at Chungking Mansions, the iconic building home to a concentration of South Asian and African businesses, and the Star Ferry, which was founded by a Parsi entrepreneur from India.

Some of the places on the routes are not landmarks or well-known to the public, such as Rednaxela Terrace in Central and Po Kok Primary School in Happy Valley, but each sheds light on an important Hong Kong story.

The former is a short street near a nightlife spot that, 130 years ago, was the home of the Philippine political figure Jose Rizal. A plaque commemorating the revolutionary hero is located at the corner of Rednaxela Terrace and Shelley Street, where Filipinos have gathered to commemorate him on his death anniversary.

The distinctive Po Kok Primary School has a significant Pakistani, Indian, Filipino and Nepalese student body. It has few Chinese students, a legacy of its former status as a “designated school” for non-Chinese speaking students. In 2013, the Education Bureau abolished the “designated school” policy – which rights groups complained was “de facto segregation” – in an attempt to promote integration.

Hong Kong-born Andrews, a social worker of Indian descent, said the scrapping of the policy has not had its intended effect. Ethnic minority parents still tend to send their children to former “designated schools,” worried – and rightly so – that they would not receive Chinese-language support in mainstream schools.

Students at some schools struggle to pick up Chinese, which presents a major barrier when it comes time for university admissions and job applications. “It’s a vicious cycle,” Andrews, who manages NGO Christian Action’s Centre for Refugees, told HKFP.

The Education Bureau does not have a set curriculum for teaching Chinese as a second language, leaving it largely up to each school to design its own syllabus. In 2014, it introduced a “Chinese Language Curriculum Second Language Learning Framework” intended to guide teachers in establishing learning targets and outcomes. Some have criticised the framework for being vague, and for authorities not providing updates on whether students’ learning has progressed since the framework was set.

“[The quality of Chinese teaching] is very inconsistent. Some schools are doing a great job, but some aren’t,” he said.

Asked whether there were plans to design a specific curriculum for non-native learners, the Education Bureau did not respond directly, referring only to Legislative Council documents about the framework and increased funding to schools admitting more ethnic minority students.

Even so, Hong Kong has come a long way, Andrews added. There are no official statistics on the number of ethnic minority students in local universities. But since a policy change in 2008 when institutions began accepting examination results for Chinese qualifications administered by international assessment boards aimed at non-native learners, more ethnic minority students have gone on to university. Poor Chinese results in Hong Kong’s university entrance assessments were among the elements holding such students back in the past.

“He’s living my dream. He’s living a lot of our boys’ dreams,” said Andrews, who is also a passionate football fan.

Still, Andrews acknowledged that Hong Kong’s progress towards integrating ethnic minorities into the local community is “two steps forward, one step back,” referring to incidents of racial profiling and discrimination – large and small – that arise daily.

The social worker, however, remained optimistic.

“The visibility we’re getting is [moving us] in the right direction,” he said. “Hopefully, one day, it will be three steps forward.”