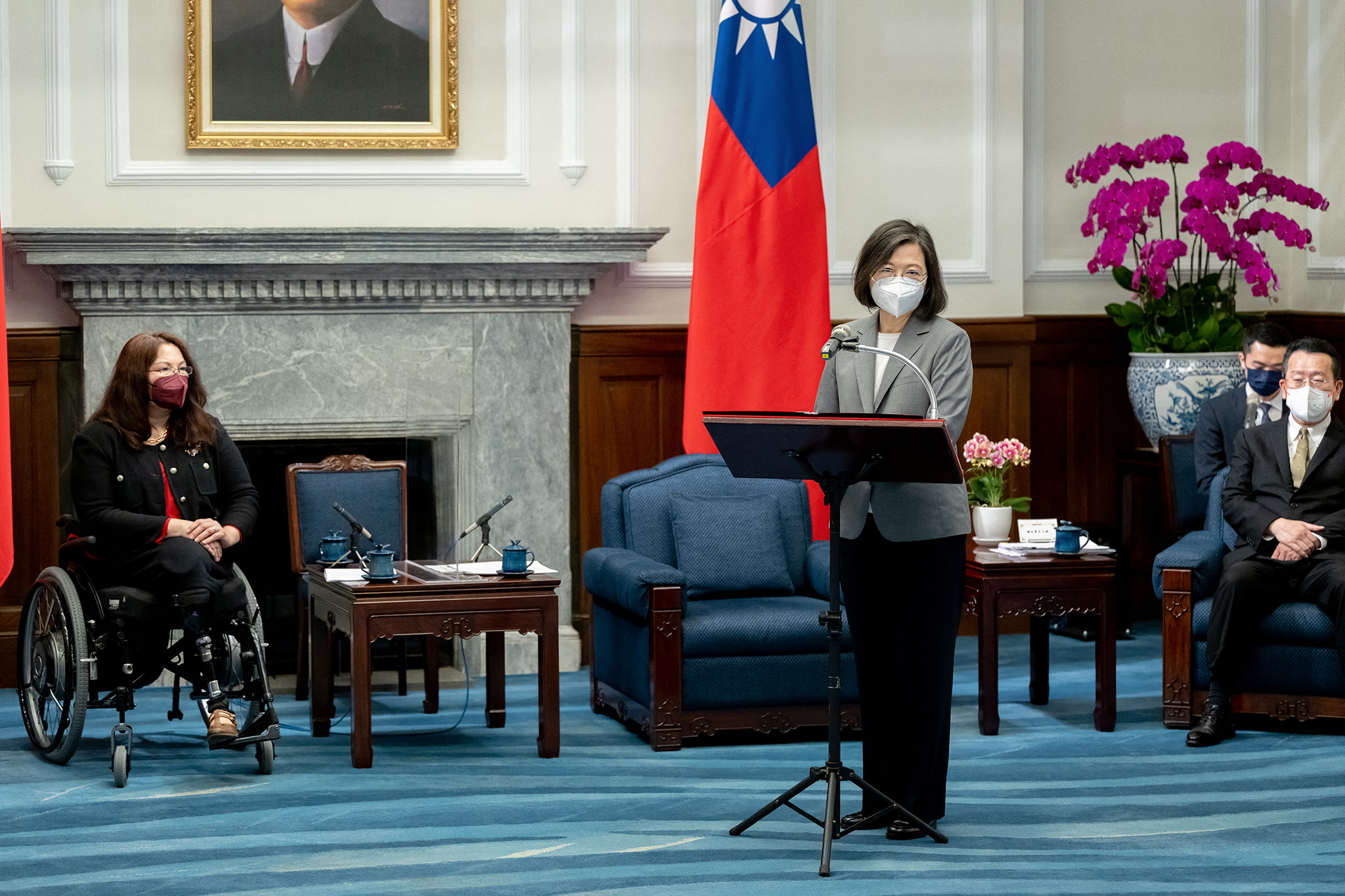 Reuters reported on August 18 that Washington and Taipei had begun talks under the US-Taiwan Initiative on 21st-Century Trade (USTI) agreed in June. The USTI was reached after Taiwan was excluded from the Indo-Pacific Economic Framework (IPEF) that US President Joe Biden announced during his visit to Asia in May.

The IPEF and USTI are similar in content and tone, in that both leave out market-access and tariff-reduction provisions.

In light of that mandate, the USTI was to negotiate agreements to change the business environment, setting the parameters for future trade talks, perhaps on future trade liberalization or market access and tariff reductions.

But even if the USTI does evolve into a full-fledged trade agreement, it will not benefit Taiwan, in light of America’s history on dealing with trade partners. Case in point is former US president Donald Trump levying tariffs on Canadian steel and aluminum, citing “national security” concerns.

The problem with that excuse was that there were no real US national-security issues, because Canada is a staunch American ally.

Indeed, Canada has had a number of trade conflicts with the US even though the two countries have a free-trade agreement. Two that come to mind are the US tariffs of softwood lumber and smoked salmon. Both were imposed to protect US domestic industries.

Simply put, US presidents will always put “America first,” as experience has proved. Biden and his successors will be no different, because that’s what American politics demand. One reason Biden hesitated to rescind Trump’s tariffs on Chinese goods was strong opposition from organized labor. Unions were and still are the strongest supporters of his Democratic Party.

Therefore, there is no reason to believe that the USTI will benefit Taiwan or pry the island away from the mainland. The recent visits by US politicians and senior officials to Taiwan were mainly in order to promote US arms exports and lure Taiwanese investment. Similarly, Trump’s “cozying up” to Taipei during his tenure aimed at getting Taiwan Semiconductor Manufacturing Company (TSMC) to invest in the US. He succeeded.

Or simply put, the aim in all cases is to sell Taiwan US products, not buying Taiwanese goods except for those America needs – semiconductors and other electronic products.

That being the case, the USTI will not be able to affect the Taiwan-mainland China economic relationship. Mainland China will remain the island’s biggest trade partner: two-way trade was valued at US$328.34 billion in 2021, according Chinese customs data. Meanwhile, Taiwan will continue to be the mainland’s biggest investor.

Chinese customs data showed that Taiwan exported $188.91 billion worth of goods and services to mainland China and Hong Kong in 2021, whereas US-Taiwan trade was $65.7 billion. Or put another way, it will be a long time, if ever, that the US could replace mainland China as Taiwan’s biggest trade partner.

After the US-made 2008 financial crisis sank Taiwan’s economy into a recession in 2009, the mainland offered the island an Economic Cooperation Framework Agreement (ECFA) in 2010.

Under the ECFA framework, the mainland allowed 539 Taiwanese items into its market duty-free. That generated nearly $14 billion for the island’s economy.

Since then, mainland China and Hong Kong have also become Taiwan’s largest sources of tourists. And they spent a lot of money, adding more “steam” to the island’s economic engine.

Of course, Taiwan has also contributed to the mainland’s economic development. It was the mainland’s largest investor last year, estimated at nearly $200 billion according to Taiwan government statistics. As well, Taiwanese investors brought manufacturing expertise and forged a “bridge” between China and the US and Japan.

All in all, Taiwan’s economy is deeply entrenched with that of the mainland. Many of the island’s manufacturers – Foxconn, TSMC and others – have branches in China. They employ millions of mainland Chinese. And according to the US Congressional Research Service, Taiwanese-owned companies in China produce billions of dollars’ worth of exports to the US.

From this perspective, the USTI will add little to Taiwan’s economy. It is not in a position to offer access to the US market or reduce tariffs. And even if the USTI can improve US-Taiwan trade, benefit to the island will be marginal because of the US recession and increasingly protectionist Congress.

Trade and investment relations between Taiwan and the mainland began during Deng Xiaoping’s reform period. China established four special economic zones in 1980, of which two were located at Shantou and Xiamen, on the east coast. Those SEZs were meant to attract investment from across the Taiwan Strait.

Or simply put, China’s SEZs enriched the economies on both sides of the Taiwan Strait. The island found a cheaper and more efficient location to produce goods and increase exports. Mainland China, on the other hand, was able to generate millions of new jobs and become the world’s manufacturing hub.

Given the two sides’ close economic relations, then, Taiwan and mainland China will likely become even closer in the future.

Although many Taiwanese do not consider themselves Chinese citizens, they still want to do business with the mainland if it is efficient and profitable to do so. Taiwanese and mainland Chinese speak the same language, and have same culture and social values. Simply put, Taiwanese businesspeople feel at home in China, which explains why large numbers of the island’s residents choose to work, do business and live in the mainland.

Indeed, when former Taiwanese leader Lee Teng-hui tried to encourage Taiwanese investors to invest in Southeast Asia, many got burned because they lacked understanding of the latter’s business environment. Further, the Southeast Asian nations’ economic prospects were not as good as those of the mainland.

Furthermore, the island has one of the lowest fertility rates on Earth, estimated at 1.219 births per woman in 2021, according to Macrotrends. Coupled with net negative migration, Taiwan’s population decline will likely continue. Like Japan and South Korea, both of which are also experiencing low fertility rates, Taiwan will thus become more dependent on the mainland for its economic well-being.

Taiwan will not have the market size to sustain economic growth. So like its “democratic” neighbors’ businesses, Taiwanese companies will increase investment in mainland China.

Yes, the mainland population is also shrinking, but it will still be home to more than a billion people for many years to come. That huge market plus China’s links to billions more people through the Belt and Road Initiative will the difficult for Taiwanese businesses to ignore.

It might be because of these strong economic incentives that most Taiwanese do not favor de jure independence. A poll by the island’s National Chengchi University found 0nly 5.1% of respondents leaning toward independence, with 1% pro-reunification and the remaining more than 90% favoring the status quo of de facto independence.

The reason is not difficult to see: Taiwan has enjoyed economic, political and social stability when cross-Strait relations are peaceful and stable.

Will the USTI be effective?

Returning to the question of whether the USTI will be able to lure Taiwan away from the mainland, the answer depends on whom one talks to. But given the initiative’s mandate and the mainland’s economic attractiveness, the answer is probably not.

As indicated above, the USTI only mandated negotiators to set the guideposts for a trade agreement. There are no provisions for market access and tariff reductions, the meat of any trade agreement.

Given the United States’ history of arbitrary use of tariff and non-tariff barriers to block imports, there is little hope that the US will import large quantities of Taiwanese products. The “America First” policy was made explicit by Trump but was in fact adopted by every US president since the Second World War. That is to say, Taiwanese imports will be blocked if they hurt domestic industries – just ask Japan.

Japan was forced to sign the Plaza Accord in 1985 because the US was running a huge deficit with the Asian powerhouse. Under the terms of the accord, Japan was forced to appreciate its currency and “volunteer” to limit its exports to America. Those demands caused a deflationary spiral in Japan for decades.

All said and done, it is difficult to do business with the US, and the Taiwanese business communities are probably well aware of that. Besides, mainland China will not invade the island unless the currently ruling Democratic Progressive Party is reckless enough to declare de jure independence.