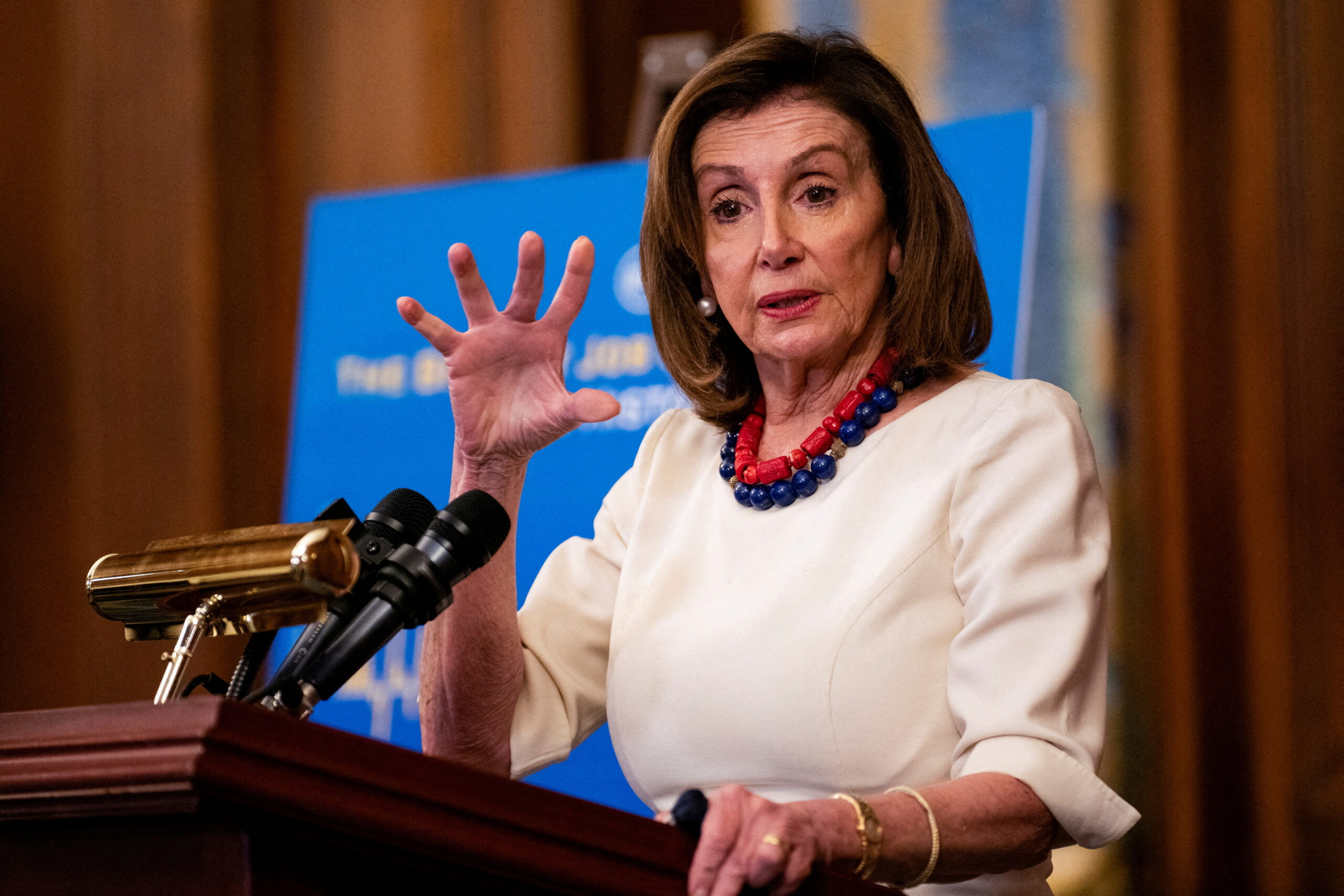 Chinese state media has declared the U.S. House of Representatives speaker Nancy Pelosi’s visit to Taiwan a “salvo of war.” This, they say will precipitate a change in China’s United States policy—“strategic and comprehensive countermeasures” is the buzzword. Even before her arrival, China was categorical about the serious ramifications of this trip as it constituted “gross interference in its internal affairs.” Even U.S. president Joe Biden publicly acknowledged it as “not a good idea.” That Pelosi’s stopover would invite trouble was written on the wall. How can a politically symbolic action be without grave consequences? But perhaps the more important question is, how much worse will things get?

The Chinese standpoint is clear: The status quo that gave cross-Strait relations a semblance of stability has been ruptured. The downward slope that the Thucydides Trap dynamic entails is certainly getting steeper. Will this then force the United States to finally review its Taiwan policy or initiate conciliatory actions? Has Taiwan become a victim of token symbolism or was the Nancy Pelosi-Tsai Ing-wen image an evocative democratic totem? And what consequences will Pelosi’s visit engender in the long term for Taiwan and the Indo-Pacific security architecture?

Toward an Inescapable Trap?

Times have certainly changed since 1997 when the then-Speaker of the House Newt Gingrich made a trip to Taiwan. Today, the balance of power between the United States and China has shifted towards the latter. While China was forced to tolerate Gingrich’s visit in 1997 to preserve its valuable economic relationship with the United States, the fact that he was not a member of President Bill Clinton’s party or administration made it more palatable. This was not the case with Pelosi’s trip.

Between 2018 and 2022, the U.S.-China trade war has metamorphosed into a new Cold War exacerbated by China’s support of Russia in the Ukraine war and U.S. efforts to coalesce like-minded partners in the Indo-Pacific with groupings like AUKUS and the China-focused Quadrilateral Security Dialogue, or Quad, composed of Australia, India, Japan, and the United States. In Europe, the United States’ confrontational policy against China has influenced the North Atlantic Treaty Organization (NATO) to label China a “systemic challenge.” It also pushed for a greater focus on the Indo-Pacific during the NATO summit by bringing in Japan and South Korea as observers. Hence, Beijing is feeling contained from multiple directions.

As a retaliatory measure, Beijing has stepped up its diplomatic maneuvers and is gearing to revitalize its own multilateral forums like the Shanghai Cooperation Organization (SCO) and BRICS (Brazil-Russia-India-China-South Africa) by leading emerging and developing states as a counter-weight to the U.S. coalition. Apart from that, China is an economic and military rival to the United States that is willing to flex its might. Since Pelosi’s arrival in Taipei, there have already been immediate consequences: Beijing has (temporarily) banned the import of about 100 Taiwanese food items including citrus fruits and fish; suspended the export of natural sand to Taiwan; and carried out its vow to respond by surrounding the island with live-fire air-and-sea military exercises and “Taiwan lockdown drills” which are reminiscent of the third Taiwan Crisis on a larger scale. Apart from that, Taiwanese government agencies were targets of an unprecedented number of presumably Chinese-initiated cyberattacks, with some of the screens showing messages asking Pelosi to leave.

The United States upped the ante with a G7 statement criticizing China for using Pelosi’s visit as a “pretext” to cause military escalation. Beijing obviously viewed this statement as a way to shame it on the world stage, linking it to the historical subjugation of China by the “Eight-Power Allied Forces.” China has not only canceled its bilateral meeting with Japan and announced eight “countermeasures” (canceled or suspended dialogue) against the United States but also sanctioned Pelosi and her family.

Arguably, this is just the beginning of China’s retaliation and it is set to engulf the entire Indo-Pacific.

China has consistently accused the United States of violating the One China Principle which stipulates that Taiwan is an inalienable part of China and that the People’s Republic of China (PRC) is the sole legal government representing the whole of China. China has also criticized the United States for undermining the spirit of the 1972, 1979, and 1982 U.S.-China joint communiques that form the foundation of their bilateral relationship. On the other hand, the United States pursues the One China Policy, yet it has maintained a policy of strategic ambiguity over whether it would intervene directly if Taiwan was attacked.

Pelosi’s visit has weaponized Chinese claims that the United States is gradually chipping away at China’s sovereignty by providing tacit support to the so-called “secessionist forces” (referring mainly to the ruling pro-independence Democratic Progressive Party, which is seen in Beijing as “ultra-nationalist”). In fact, for China, Taiwan’s attempts to promote “incremental independence” by seeking the United States’ support and its refusal to abide by the 1992 Consensus, which is another contested term, are an erosion of the foundational tenets to ensuring cross-Strait stability. The Consensus, a debatable and controversial political understanding between the CCP and the Kuomintang Party (Chinese Nationalist Party, KMT), was promulgated by the KMT as “One China, respective interpretations” although China steadfastly remarks time and again that “no room” for misinterpretation exists.

The current Taiwanese president Tsai Ing-wen, while acknowledging the meeting as a historical fact, does not recognize the Consensus as such. The United States has been somewhat non-committal about it, yet there is a contention that the securitization of the term has amounted to a “discursive practice,” eventually inflecting Chinese animosity toward Taiwan. So, although the United States and China were not aligned in their approach to the Consensus, both accorded it a security status for maintaining peace and stability in the Strait. Yet, it is argued that although the promotion of pro-independence values is directly linked to instability, the rejection of the Consensus per se does not challenge the status quo. The Chinese narrative, which links the two, seems to indicate otherwise.

Nevertheless, today Washington finds itself caught in a challenging position between wanting to support the Taiwanese pro-democratic government without sparking a flare-up in tensions with China. White House National Security Council Spokesperson John Kirby said that nothing about the visit “would change the status quo” and has tried to de-escalate tensions by reiterating that the United States does not support Taiwanese independence.

For Pelosi, the visit was essential to promote solidarity with Taiwan in the battle between autocracy and democracy—a move that has earned her support from many China hawks in the U.S. Congress. The meeting between Pelosi and Tsai—the first woman House speaker and first Taiwanese woman president—was also an impressive reminder of the stakes beyond blinkered foreign policy, as well as a contrast to the “entrenched patriarchy” in the upper echelons of the CCP.

Higher goals notwithstanding, it is not only the central understanding between the United States and China that is being eroded. The 1992 Consensus has been politicized by both sides of the Taiwan Strait. The Consensus was originally made between the KMT and the CCP to recognize only “one China”, with the implicit mutual understanding that they both had different interpretations—in 2006 the KMT admitted to inventing the term to alleviate tensions. Taiwan now largely denies the Consensus and rejects the “One Country, Two Systems” model. Beijing’s increasingly enraged responses to interferences in Taiwan have revealed its changing perspective on the 1992 Consensus as the CCP now aims to de-legitimize the elected government in Taipei altogether. Furthermore, under the assertive leadership of President Xi Jinping, achieving reunification is more essential than ever and the CCP has vowed to use force if necessary.

Pelosi’s visit took place during an already highly sensitive time for China with the People’s Liberation Army (PLA) anniversary on August 1 and Xi Jinping’s bid for a norm-breaking third term only months away at the 20th National Congress in November. Xi’s tough stance on Taiwan has become a keystone of his presidency and the need to strongly respond to Pelosi’s “provocation,” so as to maintain credibility, becomes both an incentive and a compulsion.

Therefore, a more belligerent China should be expected in the Indo-Pacific. The CCP will feel China has to react firmly to Pelosi’s visit so that it does not appear weak or humiliated by the fact it could not force the United States to comply with its warnings over Taiwan. Like in Taiwan, Beijing is likely to ramp up military intimidation over other contested hotspots in the Indo-Pacific to induce a level of respect in regional powers for its core national interests and territorial claims.

The new bipolar order will be increasingly fragile, with the risk of a war breaking out increasing as Xi inches toward achieving his “Chinese Dream” of restoring China’s great power status by 2049. India and the South and East China seas could also be impacted by the domino effect of this burgeoning crisis when small flare-ups are likely to be conflated. It will also push China to further collaborate with authoritarian and relatively weak states (e.g., Russia, North Korea, and Pakistan) but also developing states across regions that have no stake in the U.S.-led Western normative fight between democracies and autocracies but are concerned with their immediate national interests. Xi’s speech at the recent BRICS summit is a reminder of the new reality that the United States has more to lose.

In Northeast Asia, China’s growing camaraderie with an isolated North Korea coupled with enhanced American alliances with Japan and South Korea portends an even trickier situation given Kim Jong Un’s impending seventh nuclear test. The absence of President Yoon Suk-yeol and his foreign minister during Pelosi’s visit to South Korea, which was noted by China, is a signal to avoid any unnecessary diplomatic controversy with Beijing. Japan’s defiant trajectory, of course, has already been set as an Indo-Pacific anchor state that has indicated military support for Taiwan’s defense though, considering the potential for volatility, it has largely refused to comment on Pelosi’s stopover in Taiwan.

China’s calculation with India, the United States Indo-Pacific partner, despite the ongoing Himalayan conflict, has become more predictable because of Beijing’s need to expand its outreach in China-led multilateral forums like the SCO and India’s centrality as a buffer with the West and formally non-aligned power. However, a simple misstep would be enough to derail this fragile détente—the border talks have just reached a political “four-point consensus” though without any further disengagement. Hence, India will have to deftly manage Chinese advances for cross-regional cooperation.

Regardless of the furor, whether Pelosi’s visit should be criticized as a grave miscalculation or praised as a valiant attempt at displaying solidarity (or dominance in China’s view) seems moot in the grand scheme of things. What matters now is how the various regional stakeholders will maneuver diplomatic entente to de-escalate tensions between China and the United States and avoid making the Indo-Pacific the scapegoat of hegemonic gambling.