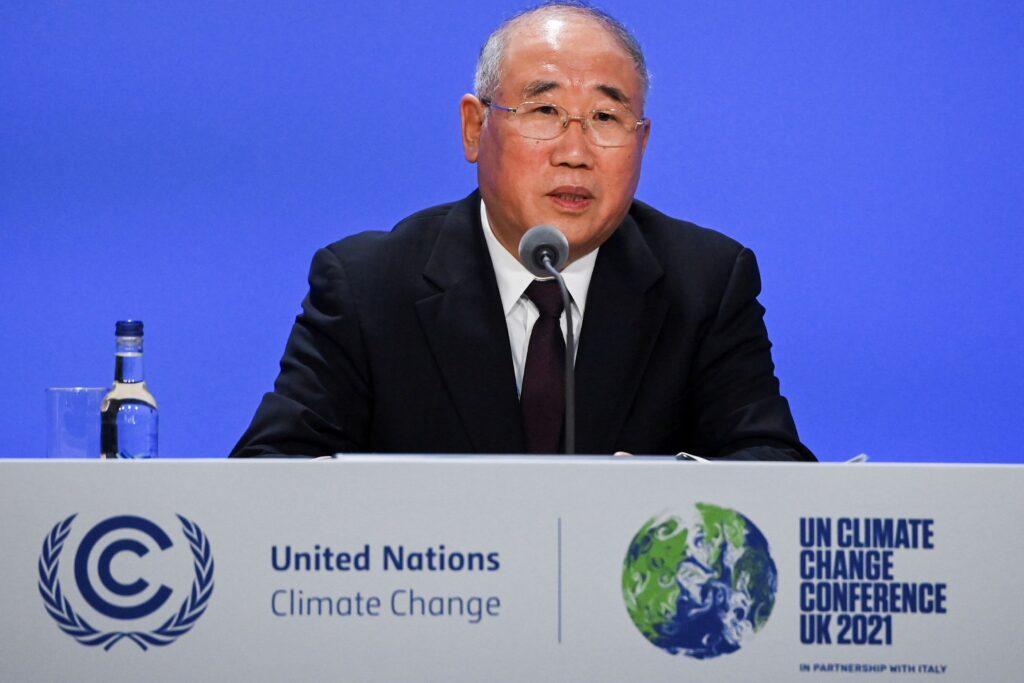 The US-China climate deal was a rare bright spot in an otherwise thorny relationship. Should it be mended?

One of the biggest surprises at last year’s United Nations climate summit came in the form of a handshake.

US climate envoy John Kerry and his China counterpart Xie Zhenhua did so at COP26 in Glasgow as they announced a commitment to cooperate on the climate crisis. The countries vowed to work together to reduce their fossil fuel emissions, and China pledged to release a plan to slash its emissions of methane – a powerful planet-warming gas – which it delivered on this week.

The terms of the agreement weren’t terribly specific, and it didn’t come with many measurable action points. But the deal was still widely applauded as a step in the right direction in an otherwise discontented geopolitical relationship.

The newfound cooperation abruptly fell apart in August when China suspended climate talks with the US – one of several measures it took in response to US House Speaker Nancy Pelosi’s trip to Taiwan.

The question now is whether COP27 in Egypt can provide the jolt of momentum needed to mend the countries’ climate change relationship. Kerry told CNN on Thursday that he has been having informal conservations with Xie this week but that “we are not formally negotiating at this point.”

“Our hope is that within a short span of time, it will become possible for us to really get together again in full measure and do the things we need to be doing as the two leading emitters in the world and as the two largest economies in the world,” Kerry said.

There are many reasons, as Kerry notes, that the two countries should be in sync on the climate crisis. Not only are they historically the most to blame for climate change, their actions also have significant sway in the rest of the world, which look to the US and China to lead on the issue.

Yet, now that cooperation is ostensibly at a standstill, some experts are weighing whether it is necessary; could competition lead to faster change?

Going into Egypt, one big thing is different from last year – the US has actually passed a massive climate law.

Democrats’ Inflation Reduction Act contained $370 billion in clean energy and climate funding and included tax credits for electric vehicles and batteries written in a way to compete with China.

But China had a head start in the clean-energy race and has spent the last decade cruising ahead on wind and solar. Last year, China installed 80% of the world’s new offshore wind capacity, dwarfing the rest of the world’s nations, according to the Global Wind Energy Council. It is also surging ahead on electric vehicles and buses; about a quarter of all new passenger cars registered in China are electric.

The US has a lot of catching up to do, but it’s “back in the race,” said Kelly Sims Gallagher, a professor of energy and environmental policy at the Fletcher School at Tufts University.

“I believe a healthy competition between the two countries will benefit everyone,” she said. “This new money is going to be a really important global injection into clean energy technology and innovation, and it’s likely to catalyze even more (development) in China. But in many respects, China currently has a first-mover advantage; there’s a lot of work for the US to do.”

In China, the US climate bill is being viewed as a “competitive gesture,” and with a certain amount of skepticism that the US can move as fast as it wants to on the clean energy transition, according to Li Shuo, a Beijing-based global policy adviser for Greenpeace East Asia.

“Part of this sentiment is sour grapes, but I think part of it is based on cool-headed analysis – if you are a country who manages to ramp up renewable energy from zero to huge in 10 years, you know the secret to success better than anyone else,” Shuo said.

Chinese officials “are not convinced the US is capable of replicating it,” Shuo said. “Only the US can prove itself and the stakes – our climate future – are high.”

The US and China – due to the sheer scale of their planet-warming emissions, money and political heft – have historically been the power players at international climate summits. It’s no different this year, with all eyes on the two countries and whether they’ll resume collaboration.

Kerry told CNN on Thursday that US-China cooperation is essential as the world tries to limit global warming to 1.5 degrees Celsius above pre-industrial levels.

“China and the US really need to cooperate on this,” Kerry said, noting that it would be impossible to keep warming to 1.5 degrees without the country. “If we don’t have China, nobody else can make it to that goal.”

And there has been a flicker of positive news at COP27.

Xie announced Tuesday at COP27 that his country has developed a national strategy to reduce its methane emissions, fulfilling the promise it made at last year’s summit as it pledged to cooperate with the US.

Xie’s announcement is the latest evidence that cooperation between the world’s two largest emitters matters – even more so because of the peer-pressure effect it can have on other countries.

“We have seen times where [US-China cooperation] is producing good results; a positive force in both the domestic context of each country, and also a boost to the international discussions,” said Nate Hultman, director of the University of Maryland’s Center for Global Sustainability, and a former Kerry official. “In that context, the suspension of the talks is a hindrance.”

The end of the US-China agreement triggered an information void as the lines of communication shut down – something that could breed mistrust, according to Sims Gallagher.

“I’m sure China knows we passed the (Inflation Reduction Act),” Sims Gallagher said. “At a high level that’s understood. But at the granular level, it’s much harder to understand what’s happening and why it’s happening.”

A senior administration official conceded they think something has been lost due to the suspended talks, killing the momentum that came out of the US and China’s joint declaration at Glasgow last year. That official said it is still an open question whether cooperation can continue this year.

Ultimately, it is in China’s best interest, and the world’s, to resume talks with the United States, said Joanna Lewis, associate professor of energy and environment at Georgetown University, because it elevates China’s stature going into a key international summit – allowing a country that is often cast as the climate villain some positive spin.

“When the Chinese lead negotiator and the US lead negotiator get up before the world together, it calls China out as a leader and puts them on a new level of climate leadership,” Lewis said. “Particularly during an international negotiation where they’re not always viewed as taking a leadership role.”