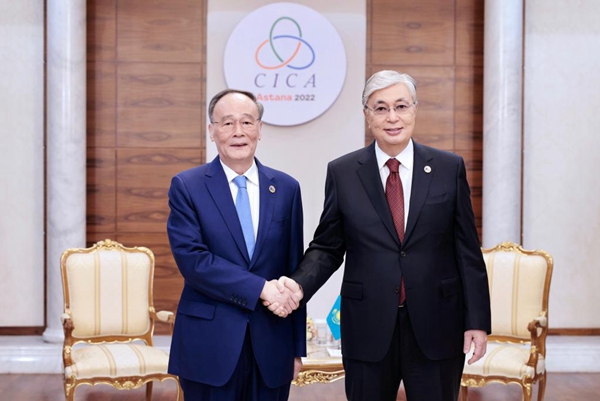 Chinese Vice President Wang Qishan met with Kazakh President Kassym-Jomart Tokayev and participated in the sixth summit of the Conference on Interaction and Confidence Building Measures in Asia (CICA) in Astana on Thursday.

Wang conveyed President Xi Jinping’s cordial greetings and best wishes to Tokayev, saying that President Xi paid a successful visit to Kazakhstan last month and the two heads of state agreed to promote the building of a China-Kazakhstan community with a shared future defined by lasting friendship, a high degree of mutual trust and sharing weal and woe, setting the direction for the development of bilateral relations in the new situation.

Over recent years, under the strategic guidance of President Xi and President Tokayev, China-Kazakhstan friendship has always been rock-solid and the permanent comprehensive strategic partnership between the two countries has been operating at a high level, he noted.

Wang said China is willing to work with Kazakhstan to implement the consensus reached by the two heads of state, continue to firmly support each other’s core interests, share development opportunities and safeguard common strategic security and development interests.

Wang underscored that the upcoming 20th National Congress of the Communist Party of China (CPC) is one of great significance to be convened at a crucial moment, as China embarks on a new journey toward building a modern socialist country in all respects.

He said this congress will fully implement Xi Jinping Thought on Socialism with Chinese Characteristics for a New Era, promote to realize the great rejuvenation of the Chinese nation through Chinese-style modernization, and map out China’s targets and tasks for the next five years and beyond.

The entire CPC and the whole Chinese nation have deeply realized that the fundamental reason behind the major achievements in the cause of the Party and the country over the past decade is setting General Secretary of the CPC Central Committee Xi Jinping’s core position on the CPC Central Committee and in the Party as a whole, and setting Xi Jinping Thought on Socialism with Chinese Characteristics for a New Era as the guiding ideology.

Focusing on the mission and tasks of the Party in the new era and new journey, we will have a further keen understanding of the decisive significance of the Two Sets, more consciously ensure the Two Upholds, make concerted and joint efforts and carry forward the cause pioneered by our predecessors to realize the great blueprint to be mapped out at the 20th CPC National Congress step by step, Wang said.

For his part, Tokayev asked Wang to convey his sincere greetings and best wishes to President Xi and highly appreciated China’s important role in the CICA cooperation.

He said that the 20th CPC National Congress will be an epoch-making event for China, which will open a new chapter in building a modern socialist country in all respects and start a new journey to achieve its second centenary goal.

Developing relations with China has always been an important diplomatic priority for Kazakhstan and President Xi’s historic visit has become a new milestone in the history of bilateral relations, Tokayev said.

He said that Kazakhstan will firmly support the Belt and Road Initiative and work with China to continuously consolidate the permanent comprehensive strategic partnership between the two countries.

When addressing the sixth CICA summit, Wang said the CICA participants should strengthen solidarity and coordination, properly tackle challenges, and endeavor to build an Asian community with a shared future.

The CICA participants need to uphold mutual benefit, implement the Global Development Initiative, speed up delivery of the UN 2030 Agenda for Sustainable Development, and promote the development and prosperity of all Asian countries, Wang said.

He noted that the CICA participants should uphold mutual learning, rise above differences in ideology and social system and advocate harmony among Asian civilizations.

The CICA participants should uphold fairness and justice, firmly support each other in following a development path suited to their own national conditions, uphold the UN-centered international system, champion true multilateralism and safeguard the legitimate rights and interests of Asian countries, Wang added.

Wang emphasized that China has all along viewed CICA’s development from a strategic and long-term perspective, and will fully leverage its role as the coordinating country in related fields, host exchanges in agriculture, green development, finance and among think tanks, and work with all parties to bring CICA cooperation to a new height.