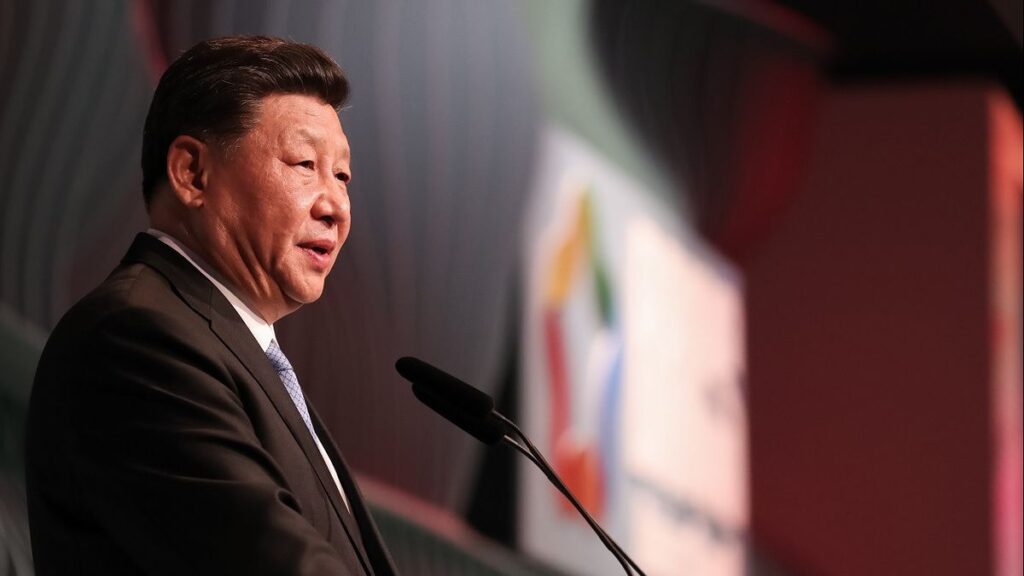 Xi Jingping: Fall From Grace Or A False Flag!

“In the midst of chaos, there is also opportunity.” -Sun Tzu

“ This video of military vehicles moving to #Beijing comes immediately after the grounding of 59% of the flights in the country and the jailings of senior officials. There’s a lot of smoke, which means there is a fire somewhere inside the #CCP. #China is unstable.” —- Gordon G , Chang , a Chinese author on Twitter

Social media is abuzz for the last few days with the news that Chinese Strongman , Xi Jinping, has been put under house arrest. Look at the irony of the fate. In October 2018 National Congress of the Communist Party of China, he had got the way cleared for himself as ‘Life Time President’ of China by having the clause of “two tenure of presidency” removed . As late as July 2022, he was expected to win the third tenure of presidency in 2023. But there has been a dramatic change of his status, if rumour of his house arrest was true .

It is immaterial whether it was a rumour or a true incident . But the possibility of such an event has been awaited for over two years now because of the backfiring of the domestic and international policies being followed by Xi Jinping. These policies had not only internationally isolated China but also created domestic upheavals which has affected his credibility at home.  His overly aggressive policies both within and outside China has led to this state of affairs . It seems Taiwan issue, Covid-19, down-trend in economy due to various reasons such as draught, Ukraine crisis, real estate collapse and disenchantment in PLA for his penchant for war has hastened his downfall .

Ever since his rise in 2013, he has been steering China away from, father of modern China, Deng Xiao Peng’s Policy of “ Tao Guang , Yang Hui “ (TGYH), which meant , “keep a low profile and bide your time, while also getting something accomplished” . Deng Xiao believed in the market economy as against controlled and planned economy by Mao.

Therefore, China had been quietly working for increasing economic clout since 1979. Cheap labour became a beehive for MNCs , USA and Europe . China, therefore, became a manufacturing hub of the world . Anything and everything in the world market , particularly electronics , carried the “ Made in China “ tag .  Thus its economy galloped forward.

Not only economy but China gained a huge technological transfer, too. And through reverse engineering, it created its own brands . Thus, 42 years later, China is the second largest economy, with 14/15 trillion USD as GDP, along with adequate military and technological muscles to not only match USA but threaten to overtake it.

Xi Jinping , who had inherited this windfall of economic bonanza of Deng Xiao’s policies in 2013, began to have different ideas. According to a Chinese Scholar , Elmer Yuan, a London- based Chinese dissident, Xi Jinping changed the direction of Deng Xiao Peng’s policies . Xi believes in power projection internationally. He therefore advocates  assertiveness because of its economic and military status . His BRI (Belt Road Initiative) project roped in a number of nations . BRI was his nodal project to gain control of the global geopolitics .

Xi Jinping began his dream project of global supremacy by giving extensive loans to Poor nations . More than a dozen countries owe debt to China amounting to more than 20% of tgeir GDP. These countries are Djibouti, Tonga, Maldives, the Republic of the Congo, Kyrgyzstan, Cambodia, Niger, Laos, Zambia, Samoa, Vanuatu, and Mongolia. Their inability to repay their loans leads to China taking charge of hard assets. Some scholars call it a Chinese debt – trap , which binds these countries in bondage to China. In total, the Chinese state and its subsidiaries have lent about $1.5 trillion in direct loans and trade credits to more than 150 countries . According to some reports, these Countries owed more than 6% of world GDP in debt to China as of 2017.

Xi Jinping’s FFYW (Fa Fen, You Wei) Doctrine, aims to prove one’s worth through firm resolve. it seeks to subdue one’s adversaries through offensive and aggressive actions. To do so, he has been using China’s economic power and military muscles .They say, use of Corona virus , as a Bio -weapon was a part of its display of military muscle . He set forth a plan to overtake USA as Numero Uno nation of the world by 2049 . In fact Elmer Yuan claims that he was keen to replace Vladimir Putin as the leader of the Communist world from Europe through Asia to Africa . This is where he came in serious conflict with USA and West .

He had miscalculated that with economic and military muscle he could make China as the world leader. He began expanding into East China Sea and South China sea and picked up quarrels with its neighbours, Japan and ASEAN. Almost 14 neighbours China has territorial disputes. Xi Jinping intensified his border dispute with India in 2020 and it continues.   This is despite the fact that he had bonhomie with Narender Modi in 2016, when he visited India . Further, he made earliest unification of Taiwan with China as his primary mission. All this because he could flex his military and economic clout .

But he had forgotten the wise words of ancient Chinese scholar, Sun Tzu, who had said , “ To win one hundred victories in one hundred battles is not the acme of skill. To subdue the enemy without fighting is the acme of skill.”.  Also, he did not realise that USA was the best student of Sun Tzu, in application of “ Soft Power” to disintegrate its adversary . USSR example was just ignored by him .

China’s misery began with the spread of “ Wuhan Virus” or simply Covid -19. The whole world believes that China deliberately hid its origin and spread. While whole world tormented under its impact , Xi Jinping got inebriated with his new found weapon . His sense of complacency did not realise that it can come home to roost . And today some 800 million Chinese are impacted by its rapid spread and suffer from Xi’s “Zero Tolerance” policy . This has affected people’s daily life .

With the spread of covid , China’s economic growth had been affected . Recent report by Asian Development Bank (ADB) pegs its economic growth at 4-4.5% . There are number of factors which have led to it . With the spread of Covid, most of the MNCs had begun to shift their manufacturing bases from China . This halted the  economic activity and cut down purchasing power of common man . Its telling effect was on Real Estate industry . According to reports , it has run into a debt of 5 Trillion USD .

Nature has its own impact on Chinese economy . Drought has affected its rivers , particularly River Yangtze. Draught has dried them . This has led to shutting down of hydro power projects , thus, creating energy crisis . China has thousands of dams on the rivers, which are the source of its energy . Reduced production of electricity has affected its industry . Reports suggest that Gross domestic product (GDP) fell by 2.6% in the three months to the end of June in 2022.

Ukraine war has affected its trade . Its exports have fallen due to slowing down of economy in Europe . Bloomberg report says that recovery of Chinese economy is not in sight . Experts feel to give it a boost , china needs to spruce up domestic demand . But falling incomes have dampened the domestic demand . Economy is thus in trouble, which adds to people’s frustration against the government .

Chinese military too is not happy with Xi Jinping’s aggressive policies , whether it was Taiwan or Indian Ladakh.  Galwan face off with Indian soldiers  has told its military leadership that Chinese soldiers were not adequately trained in mountain / high altitude warfare .

“At present, the world’s largest and experienced country with plateau and mountain troops is neither the US, Russia, nor any European powerhouse, but India,” wrote, some time back,  Huang Guozhi, senior editor of Modern Weaponry magazine. He is affiliated to China’s leading maker of equipment for the People’s Liberation Army (PLA). He further contends that mountaineering was an “essential skill” for each Indian soldier deployed in the mountains.

Therefore it is obvious that PLA was not comfortable with his war mongering and aggression . It is alleged that Xi Jinping got a wind of this and sacked a senior General of PLA . But he knew that wind was blowing against him . Therefore over the last two years , he did not move out of Beijing .

Taiwan issue, as a fallout of Nancy Pelosi visit , had further increased PLA fears that Xi might get PLA involved with a non- winnable war in Taiwan , particularly after US president Joe Biden threatened that USA would defend Taiwan , if China invaded it .  This was in response to Xi Jinping ordered live firing and mock drills of attack and violation of Taiwan air space by PLAAF . Emboldened by Joe Biden Statement , Taiwan warned China that any attempt to annex any small island under Taiwanese control , would be treated as an “ Act of War”.

PLA and his political opponents had been looking for an opportunity to oust Xi Jinping. The opportunity came when he had to move out of China for SCO ( Shanghai Corporation Organisation) meet in Samarkand , Uzbekistan. According to Elmer Yuan , he reluctantly went to attend the meet because of Russian President Vladimir Putin . He went on 13 Sept 2022 but rushed back on the evening of 16 Sept 2022, after cancelling all official engagements. There after there was No news about him .

Nepal correspondent first claimed in a tweet on 21 September 2022, that Xi Jinping had been arrested and sent out of Beijing to a place called, Zhongnanhai.  near inner Mongolia. But it was not confirmed by official Chinese media . However, his absence from Communist Party plenum recently speaks of something fishy about his absence , when one sees the General sacked by XiJinping being present and holding the centre stage .

According to Elmer yuan , Xi Jinping was probably deposed with the help of CGB , (security guards of President) , whose boss had  accompanied Xi Jinping to SCO meet . Probably , CGB had been bought over . Elmer further confirms that the deposition was carried out by PLA and Chinese league , a group of ordinary communist party workers and bureaucrats. There is no confirmation from any other source or official media of any country but twitter has been blurting out this story .

If it is true that Xi Jinping has been deposed , what would be the impact of his removal on the global geopolitics and India ? It needs an assessment after it was clear as to who was the new strongman of China . There might not be a total reversal of Xi Jinping policies . It might slow down Chinese race for global supremacy . In any case,  world will have a sigh of relief, however short-lived it was ! All the same , India need not lower its guard as it must be admitted thst two Asian giants can never be friends because of their opposing political ideologies and competitive economies .