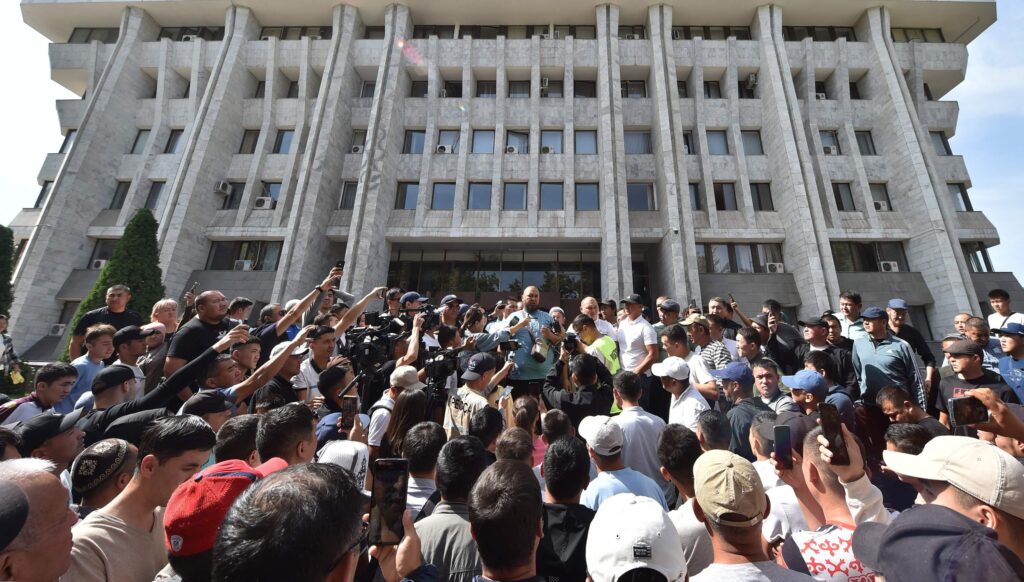 Both countries have committed to vacate four border posts apiece near areas where clashes took place.

Kyrgyzstan and Tajikistan have reached an agreement to demilitarize a conflict-afflicted section of their shared border, but the deal has sparked anger among Kyrgyz communities affected by this month’s unrest.

Under the terms of the protocol signed on September 25 by the security services chiefs of the two countries, troops will be ordered to vacate four border posts apiece near areas where clashes took place.

“I hope that all points in the protocol that has been signed will be implemented,” said Kamchybek Tashiyev, head of the Kyrgyz State Committee for National Security, or GKNB.

Tashiyev said the agreement would lay the ground for around 140,000 people displaced from their homes in the Batken and Leilek regions to return.

“We are organizing everything. From today, I can assure you that it will be peaceful at the border,” he said.

The deal has met a hostile reaction within Kyrgyzstan, however, as many complain that Bishkek is caving to Tajik intimidation. Without Kyrgyz troops on the ground in disputed areas, critics of the demilitarization deal say, Tajik communities may seek to squat on the disputed lands. A crowd gathered at the regional administration building in the southwestern Kyrgyz city of Batken on September 26 to voice its discontent.

The criticism appears to have stung the Kyrgyz GKNB, which responded with a statement specifying that the agreement signed this week is only temporary.

“Protection of the Kyrgyz-Tajik state border at those [disputed] sections is currently being conducted by mobile units, which will continue to carry out their service on the border along established and agreed routes,” the GKNB said in a statement.

An earlier deal engineered to avoid a repetition of hostilities committed forces on both sides to draw back heavy weaponry. This last bout of fighting saw the deployment of powerful artillery, machine guns, armored vehicles, and even an attack drone. The scale of weaponry in use during border melees between Kyrgyzstan and Tajikistan over the past few yeas has become steadily more powerful and deadly, arousing concerns that the two countries could in time slide into something resembling full-blown war.

Tajik Foreign Minister Sirojiddin Muhriddin claimed during a speech to the UN General Assembly on September 25 that Kyrgyzstan was violating the terms the agreement reached on September 20 by “creating a false appearance of withdrawing troops and heavy military equipment from the line of contact by hiding them in border settlements.”

Any “responsibility for the next round of tension on the Tajik-Kyrgyz border will fully lie with Kyrgyzstan,” Muhriddin said in the speech.

Both countries blame one another for sparking and then escalating this month’s deadly unrest along the border, which claimed more than 100 lives. All available evidence appears to indicate the bulk of the damage to infrastructure inflicted in the conflict was sustained by Kyrgyz civilians – a fact that the government in Bishkek has cited to advance the case that it was the victim of a premeditated military assault.