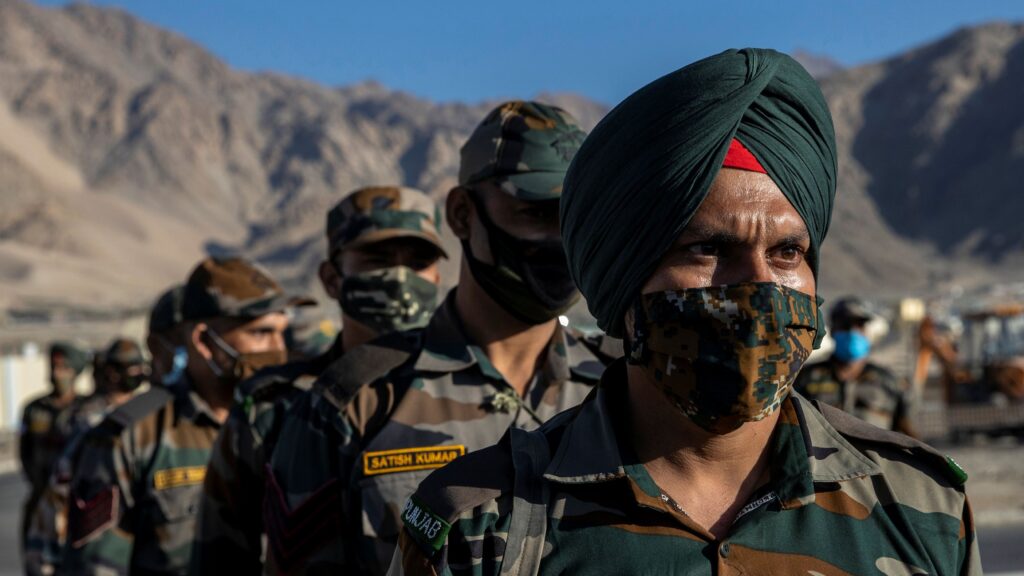 Locals say that the recent military disengagement around a disputed area puts their livelihoods at risk. They accuse New Delhi of turning its territory into a buffer zone to provide significant concessions to Beijing.

Local villagers say that the recent process of disengaging Indian and Chinese troops from the disputed area of Ladakh caused around 120 square kilometers (74 square miles) of Kugrang Valley — comprising major pastures for Pashmina goats in the region’s cold desert — to be turned into a buffer zone.

They accuse New Delhi of failing to deter Beijing’s expansionist plans along the de facto border between India and China known as the Line of Actual Control (LAC).

“We are in shock. How can the government surrender our territory? These scarce pastures are our lifeline. Without them our livestock will perish and so will our livelihood,” said Acho Stobgais, the head of Ladakh’s Phobrang village.

At least 4,500 Pashmina goats, 700 yaks and other livestock of 113 families of Phobrang, Lukum and Urgo villages are dependent on the pastures of Kugrang Valley, which has become a no-go area for both Indian soldiers and civilians, Stobgais said.

India and China announced on September 8 that they were pulling back their troops from Patrol Point-15 (PP-15), a border flashpoint in eastern Ladakh where they were locked in a face-off for over two years.

The PP-15, north of Gogra, is part of a long arc of strategic positions that mark the LAC, numbered sequentially from Point-1 at Karakoram, then running through the Depsang Plains to Pangong Lake.

It took 16 rounds of commander-level talks to reach the decision ahead of the Shanghai Cooperation Organisation (SCO) summit in Uzbekistan last week.

“According to the consensus reached in the 16th round of India China Corps Commander Level Meeting, the Indian and Chinese troops in the area of Gogra-Hotsprings (PP-15) have begun to disengage in a coordinated and planned way, which is conducive to the peace and tranquility in the border areas,” read their joint statement.

India’s Foreign Ministry spokesperson, Arindam Bagchi said, “It has been agreed that all temporary structures and other allied infrastructure created in the area by both sides will be dismantled and mutually verified. The landforms in the area will be restored to the pre-stand-off period by both sides.”

Does disengagement in Ladakh hand concessions to China?

Stobgais, who worked as a driver for the Indian Army between 2019-20, contested the Indian government’s claim that the area has been restored to the pre-standoff period, before April 2020.

Instead, he said New Delhi gave significant concessions to Beijing for reasons unknown to him by creating demilitarizing zones on its own territory.

In 2011, the Indian border guards would patrol 8 kilometers further from PP-15 up to Alpha-3 pass towards the LAC, Stobgais added.

“Now, the whole Kugrang Valley has been surrendered,” he pointed out. “The biggest surprise is that the government allowed removal of barracks of Indian border guards at PP-16, which had been there since 1962, and moved back to Karam Singh Hill.”

“We are worried about this unfortunate turn of events. If India continues giving asymmetric concessions to China, time is not far when the PLA [China’s People’s Liberation Army] will overrun our villages,” Stobgais said.

Stobgais urged India to include local elected leaders in the negotiations with China as they know about the limits of Indian territory in the disputed mountainous region.

One of India’s renowned strategic analysts, Pravin Sawhney, who backs the locals, said the buffer at the disengagement site is in Indian territory because India can’t throw out the PLA.

“China has clearly said they won’t go back to the April 2020 position and disengagement will take place on their terms and timeline. Buffers have been created in Indian territory and they have told India that the Depsang plains is non-negotiable,” Sawhney said.

Priya Sethi, a politician from India’s ruling Bharatiya Janata Party (BJP), denied that India has lost any territory in Ladakh, saying under PM Narendra Modi’s decisive rule, the country will not lose an inch of its territory.

“There is a concerted campaign going on within India against Modi because his stature is growing globally. That group is spreading this falsehood that we have lost land in Ladakh. Modi is decisive and sees into the eyes of an enemy unlike past leaders,” Sethi said.

In August 2021, the previous disengagement and creation of buffer zone between the two armies took place at PP-17A, at the confluence of the Changlung La stream and the Kugrang river, which had been falling on the Indian side of the LAC and had never been contested by China before the 2020 crisis.

Locals accuse the PLA of adapting a unique way of grabbing land in Ladakh. They first send shepherds to uninhabited areas with vast grazing fields and follow them by occupying the land with its troops.

With the creation of demilitarized zones on Indian territory, locals are concerned that Chinese nomads will start grazing their cattle in the Kugrang Valley.

The Indian and Chinese presents were amongst the delegates at last week’s SCO summit in Samarkand, Uzbekistan

“This is the typical Chinese way of land grab. They first send nomads, lay claim on the grazing land and then PLA soldiers occupy the territory,” a local elected councillor Konchok Stanzin said.

Stanzin said the disengagement between the two armies was not bringing any relief to the local population but instead India was turning the main Pashmina Belt in eastern Ladakh into disputed land.

Stobgais said a herd of the pashmina goats has to move around in a 12-kilometer radius in a day to feed themselves.

For a sustainable income from livestock, he noted that a family in the area keeps around 300 goats so that they produce enough pashmina fiber.

Four goats produce approximately 1 kilogram of the fiber which is sold at $44 (€44).

“We are not against the Indian Army. Our concern is loss of grazing land which is directly affecting our livelihood and the whole chain of pashmina fiber economy,” he said.

India and China carried out a major troop buildup along the LAC soon after New Delhi abrogated limited autonomy of India-administered Kashmir and divided the erstwhile state into two federally governed territories — Jammu and Kashmir, and Ladakh.

It escalated into high tensions after their armies violently clashed in June 2020, resulting in the killing of 20 Indian soldiers and five Chinese soldiers in Galwan Valley in Ladakh.

Since then, both countries have deployed thousands of soldiers and heavy artillery in the region, backed by massive airpower, tanks, unmanned aerial vehicles and drones.

In an attempt to diffuse the crisis, both militaries carried out multiple rounds of talks, resulting in disengagement at all friction points in the region — including the north and south banks of the Pangong Lake, PP-14, PP-15 and PP-17A.

The 255-kilometer road runs through eastern Ladakh and connects India to its northernmost area, the Daulat Beg Oldie (DBO).

The DBO — which is at the base of the Karakoram Pass that separates China’s Xinjiang Autonomous Region from Ladakh — has an advanced landing ground.

The DSDBO road provides India access to Tibet-Xinjiang highway and runs parallel to the LAC through Aksai Chin, which is the eastern part of Kashmir administered by China since the 1950s.

To the west of the DBO is Pakistan-administered Kashmir’s Gilgit-Baltistan region through which China is currently constructing the China-Pakistan Economic Corridor (CPEC) connecting China with the deep sea port in Pakistan’s Gwadar city.

“Chinese threat has increased substantially and it is growing because of the capabilities that the PLA is inducting in the theater,” said Sawhney.