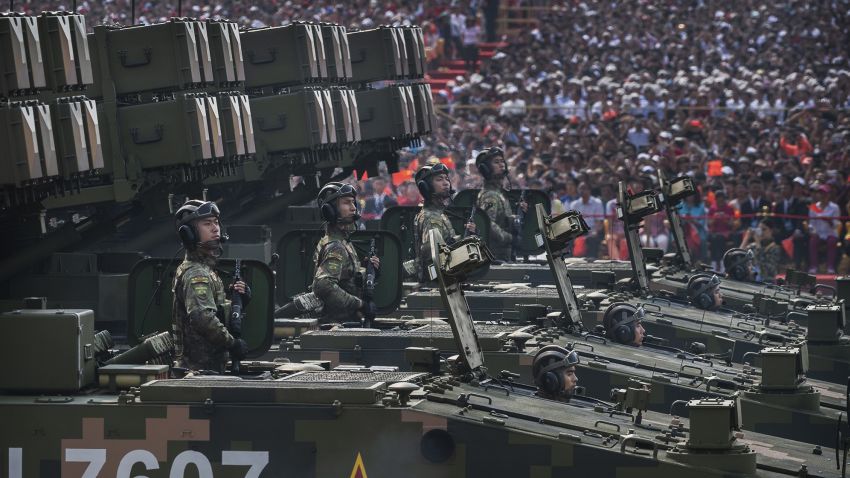 How We Would Know When China Is Preparing to Invade Taiwan

As tensions between China, Taiwan, and the United States have increased over the past year, numerous articles and pundits have posited that war could come sooner rather than later.

These speculations were prompted by comments from senior U.S. military officers that Chinese President Xi Jinping has directed the People’s Liberation Army (PLA) to be prepared to invade the island by 2027, although the basis for this claim is not given. A new report claims some in the U.S. intelligence community now assess that China could attack as soon as 2024 (presumably around Taiwan’s January 2024 elections).

But if war is Beijing’s plan, there ought to be reliable indications that it is coming. So it seems like an appropriate time to consider precisely what Chinese full mobilization for major conflict might entail. Although China last fought a major war against Vietnam in 1979, it is possible to frame how Beijing might prepare for an invasion and what specific indicators we could expect to see. Such a military conflict would reflect four assumptions underpinning Chinese leaders’ decisionmaking.

First, reports indicate that Xi and the Chinese Communist Party (CCP) understand that an outright invasion of Taiwan would be a daunting strategic task and would end any putative return to the status quo ante. Such a war could last years to a decade, and China would be subjected to American and possibly multilateral sanctions and perhaps even a U.S. blockade. The basis for the CCP’s domestic legitimacy would shift from the emphasis on generating economic growth that has prevailed since 1978 to a near-exclusive focus on nationalism in the cause of Taiwan’s “reunification” with China.

Second, China’s political goal since U.S.-China diplomatic normalization in 1979 has been to preserve the possibility of political unification with Taiwan at some undefined point in the future. Beijing has been pursuing that goal by promoting rapid economic integration with Taiwan, and until the coronavirus pandemic, it enabled greatly expanded travel across the strait, with millions of Chinese tourists visiting Taiwan annually and millions of Taiwanese working in China. But since 2020, travel bans and quarantines in China and Taiwan have drastically curtailed travel. And China’s 2019 crackdown on democracy advocates in Hong Kong further tarnished Beijing’s “one country, two systems” model for eventual political settlement and negatively influenced perceptions among many Taiwanese of Beijing’s motives, intentions, and goals. These trends have undermined Beijing’s apparent hope that people-to-people contacts and economic interchange would promote unity across the Taiwan Strait. This rapid erosion of ties has made a peaceful unification even more doubtful.

Third, China’s political strategy for unification has always had a military component, as well as economic, informational, legal, and diplomatic components. Most U.S. analysis frames China’s options as a binary of peace or war and ignores these other elements. At the same time, many in Washington believe that if Beijing resorts to the use of force, the only military option it would consider is invasion. This is a dangerous oversimplification. China has many options to increase pressure on Taiwan, including military options short of invasion—limited campaigns to seize Taiwan-held islands just off China’s coast, blockades of Taiwan’s ports, and economic quarantines to choke off the island’s trade. Lesser options probably could not compel Taiwan’s capitulation but could further isolate it economically and politically in an effort to raise pressure on the government in Taipei and induce it to enter into political negotiations on terms amenable to Beijing.

Finally, many of the understandings, military factors, and ambiguous positions that enabled decades of peace, prosperity, and democracy on Taiwan are now eroding due to China’s burgeoning economic and military power, Taiwan’s consolidating democracy led by the pro-independence Democratic Progressive Party, and burgeoning U.S. determination to play the “Taiwan card” in its strategic rivalry with China.

If China has actually decided to go to war with Taiwan—and, per President Joe Biden’s recent gaffes, with the United States—in eighteen or twenty-four months, how would we know? For one, it almost certainly would not be subtle, at least to the U.S. intelligence community and probably not to Taiwan and other Western observers. Modern war between great powers (and even not-so-great powers) consumes huge stocks of key munitions, especially precision-guided ones for high-intensity naval, air, and amphibious warfare. So China would have already started surging production of ballistic and cruise missiles; anti-air, air-to-air, and large rockets for long-range beach bombardment; and numerous other items, at least a year before D-Day. Commercial imagery used by nongovernment analysts has identified new military facilities and weapons in China, including what appears to be new silo fields for its expanding nuclear-armed force of intercontinental ballistic missiles. Major production by China of key munitions would be noticed by international government and nongovernment observers alike.

China also would take visible steps to insulate its economy, military, and key industries from disruptions and sanctions. This would go beyond its current industrial policies and dual circulation strategy, which collectively aim to achieve technological and material self-sufficiency, or even its limited measures against increasing U.S. use of export controls, sanctions, and economic and financial pressure. As CSIS Senior Fellow Gerard DiPippo recently noted, near-term indicators of approaching conflict would include financial elements such as imposition of stronger cross-border capital controls, a freeze on foreign financial assets within China, and rapid liquidation and repatriation of Chinese assets held abroad. It would also include a surge in stockpiling emergency supplies, such as medicine or key technology inputs; a suspension of key exports, such as critical minerals, refined petroleum products, or food; measures to reduce demand or ration key goods, especially imports such as oil and gas; and prioritization or redirection of key inputs for military production. Chinese elites and high-priority workers would also face international travel restrictions.

And China’s leaders probably would be preparing their people psychologically for the costs of war: austerity, tens of thousands of combat deaths, and civilian deaths from U.S.- and Taiwan-launched strikes. For a conflict that would begin in 2024, as some observers in the United States have predicted, such measures likely would be happening now—and they are not, despite recent heightened tensions and U.S. choices and actions that Beijing views as provocations.

It seems plausible, therefore, that if the American intelligence community saw some of that happening, they would right now be releasing that information publicly, just as they did almost four months before Russia invaded Ukraine. They would not just be leaking it to one news outlet.

Preparations within the PLA would also alert U.S. intelligence that preparations for war were underway. Six or twelve months before a prospective invasion, China probably would implement a PLA-wide stop loss, halting demobilizations of enlisted personnel and officers, just as it did in 2007 when it ratcheted up pressure as Taiwan prepared to hold elections. (Chinese officials would have already announced these moves if they truly planned to use force as soon as early 2024.) Three to six months out, the PLA would also halt most regular training and perform maintenance on virtually all major equipment. It would expand the capacity of the Navy and Air Force to rearm, resupply, and repair ships, submarines, and aircraft away from military facilities that the United States or Taiwan would likely bomb, including naval bases and military airfields near the Taiwan Strait. The PLA Navy would replace electric batteries on its non-nuclear submarines and intensify training in loading missiles, torpedoes, and ammunition on all vessels.

In its Eastern and Southern Theater Commands opposite Taiwan, the PLA would take preparation steps rarely seen in mere exercises. Field hospitals would be established close to embarkation points and airfields. There likely would be public blood drives. Mobile command posts would depart garrisons and move to hidden locations. Units responsible for managing petroleum, oil, and lubricants would deploy with field pipeline convoys to support vehicle preparation at civilian ports being used to load transport ships embarking on an invasion.

The PLA would place forces, including those far from the Taiwan Strait, on alert. Beijing has long feared chain-reaction warfare, either by the United States or encouraged by it, on China’s other borders. Across the PLA, leave would be canceled and service members would be recalled to duty and restricted to their garrisons or ships. Hundreds of military air and chartered flights would carry key material and senior officers to inspect preparations in the Eastern Theater Command. Normal passenger and cargo flights would be disrupted. This would be noted even by amateur airline flight tracking enthusiasts, who weighed in last month to debunk claims that flights in and out of Beijing had been halted amid unsubstantiated rumors of a coup.

And the CCP would order national mobilization at least three or four months in advance of planned combat—a very public step that has not been taken since 1979. Provincial military-civilization mobilization committees would commandeer commercial ships, roll-on/roll-off vehicle transport ships, large car ferries, aircraft, trains, trucks—everything relevant to a war effort, for preparation prior to conflict, and then throughout. They’d mobilize an enormous number of people, including reservists to guard key civilian infrastructure, be prepared to repair U.S. bomb damage, and prevent riots and sabotage. Western manufacturers operating in China would experience supply chain disruptions as key transportation and some component manufacturers shifted to war preparation. These would all be public actions, reported in Chinese national and provincial media and quickly detected by Western government and private analysts.

Recently, a recording and transcript of an April war mobilization exercise in the southern province of Guangdong leaked to Western sources. It is unclear how often such drills are conducted, but they are probably an annual event to ensure preparedness for natural disasters and potential military conflict. The transcript provides a wealth of details on the massive joint military-civilian mobilization effort of one province: hundreds of thousands of people; almost 1,000 ships; twenty airports; six shipyards and ship repair yards; and medical, food storage, and energy facilities. Although Guangdong is wealthy, populous, industrialized, and strategically located for a Taiwan conflict, similar actions likely would be undertaken in every province, especially coastal ones.

If China decides to fight a war of choice over Taiwan, strategic surprise would be a casualty of the sheer scale of the undertaking. Even if Xi were tempted to launch a quick campaign and hope that Taiwan’s will to fight would quickly collapse, Russia’s disastrous invasion of Ukraine probably has induced more caution in Beijing. Such a roll of the dice on China’s part would be far riskier than Russia’s land invasion, not only because the PLA would have to conduct the largest and farthest amphibious invasion in modern history, but also because—unlike in Ukraine—cautious PLA war planners would have to assume that the United States and some of its regional allies would quickly commit combat forces to the island’s defense. Any invasion of Taiwan will not be secret for months prior to Beijing’s initiation of hostilities. It would be a national, all-of-regime undertaking for a war potentially lasting years.