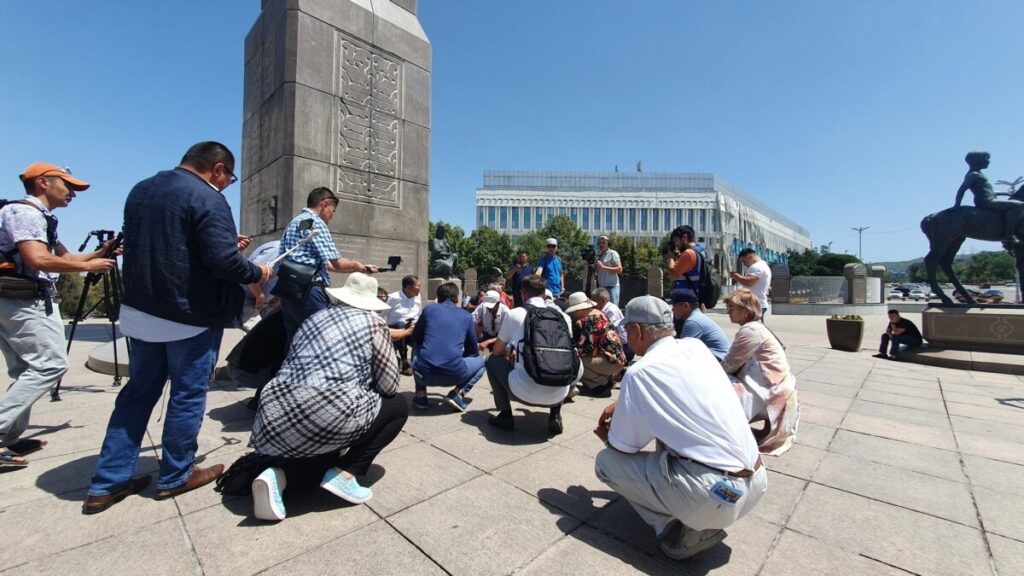 With reports of dozens killed as well as hundreds injured and detained in recent weeks, the Tajik government tried to settle a long-standing conflict in its Gorno-Badakhshan Autonomous Oblast (GBAO) with forceful and repressive measures in a crackdown that has shocked the remote region.

In the process, Dushanbe has seemingly destroyed any hope of regaining support in GBAO, where the ethnically and culturally distinctive Pamiri people make up the majority of the province’s some 230,000 inhabitants.

“A considerable part of the GBAO population maintained a certain level of loyalty…or at least supported the idea of finding a compromise with Dushanbe,” a Tajik analyst, who spoke on condition of anonymity for security reasons, told RFE/RL. “But today the population is in complete shock as many of us hoped for a peaceful solution [and] no one expected such a level of brutality [from the government].”

The analyst added that there is a total collapse of relations between Dushanbe and the province.

Among those killed in the reported police actions were unofficial leaders Mahmadboqir Mahmadboqirov, in Khorugh, the regional capital, on May 22, when at least 21 people were killed; and Khursand Mazorov and Zoir Rajabov, who authorities said were “neutralized” during an operation on June 12.

The three were influential members of the GBAO community and their deaths incensed locals.

Tajik President Emomali Rahmon said at a meeting of government officials in the Dangara region on June 18 that he had ordered “the neutralization of persons armed with weapons” because “there was no other way out.”

Evolution Of A Conflict

The protracted conflict in GBAO started in July 2012 when the Tajik government undertook a large-scale military and police operation to arrest and eradicate a group of local informal leaders in the region that it accused of criminal and anti-state activities.

Compared to other Tajik regions, GBAO was traditionally distinguished by its relatively strong and well-developed civil society and nongovernment sector. Therefore, for years it remained the only region where the government and law enforcement officials had to consider the people’s opinion and possible reaction when making political and economic decisions.

But as the authoritarian Rahmon — who came to power in 1992 — slowly consolidated his position, he attempted to establish complete control over the region, purging local leaders from the government and suppressing civil society leaders.

This repressive policy promoted a large-scale protest movement in GBAO that was enhanced by a deepening socioeconomic crisis and a sharp drop in living standards. Although GBAO occupies almost half of Tajikistan and is rich in mineral and natural resources, it remains the least-developed region in the country with the highest unemployment rate and lowest living standards.

As a result, tensions continued to rise in the region in the last decade, causing sporadic outbursts of violence.

In October 2018, with the aim of defeating the protest movement, Tajik officials suddenly declared a new “anti-criminal campaign” in GBAO, deployed additional troops and police, and introduced martial law in Khorugh.

The real power in the province was transferred to the newly established Inter-Agency Headquarters headed by General Saimumin Yatimov, the head of Tajik’s secret service, known as the State Committee for National Security.

The latest round of the conflict began in November, when a group of law enforcement agents killed Khorugh resident Gulbiddin Ziyobekov, whom they accused of attacking a deputy prosecutor in February 2020.

The official statement claimed that Ziyobekov was shot after resisting arrest — though eyewitnesses say he cooperated with police. Locals claim he was shot dead on the way to the police station.

On the same day, protests erupted in Khorugh and police shot into a crowd that had assembled in front of the mayor’s office, killing three.

That led to further protests, with as many as 5,000 people gathering at the peak of the demonstrations, which lasted for four days. Authorities cut off mobile communications and the Internet as the rallies began and for several months have established a complete information blockade of the region.

From those first demonstrations in November until the middle of May, the government and protest leaders tried in vain to negotiate a resolution to the conflict.

In a statement posted on social media in December, the protesters demanded that the government normalize the situation in the province by demilitarizing the region, investigate the alleged killing of civilians, and eliminate the Inter-Agency Headquarters and return power to the provincial administration.

Civic activists say that the government used the negotiations to try and divide the protest movement while simultaneously preparing the brutal crackdown in a bid to finally resolve the conflict.

Ramzess Shogunov, a popular Badakhshani blogger, has accused the government of provoking riots in GBAO by arresting and killing the most popular public figures and informal leaders of the region.

The government has even arrested holders of Russian passports and people have been forcibly deported from Russia at the request of Tajik authorities.

The greatest public outburst was caused by Moscow’s deportation and subsequent prosecution of Chorshanbe Chorshanbiev, a well-known MMA fighter who in March received a prison term of 8.5 years, and Amriddin Alovatshoev, a leader of the Pamiri diaspora in Russia who received an 18-year term in May after being abducted in Moscow in January and bundled to Tajikistan.

Tajik officials also deployed additional police and military detachments in the region and increased pressure on local leaders, especially Mamadboqirov, who headed the most defiant group of protesters.

Thus, by May the internal political situation in the province came to a shaky stalemate when prospects for a peaceful resolution of the conflict seemed increasingly doubtful.

The ruthless punishment of Chorshanbiev and Alovatshoev — on what observers say are baseless charges — was the final straw and led to protest leaders calling for fresh demonstrations in Khorugh on May 16.

One witness told RFE/RL that the prevailing opinion of young protesters was “we will be arrested anyway and prosecuted for nothing. Let’s do something so there will at least be a reason for our arrest.”

But this time the authorities were better prepared: The army and police units blockaded the center and major streets and districts of the city to prevent public gatherings. In the following days, security services launched a new wave of large-scale repression targeting all informal leaders and protest groups.

Civil activists say that all of the main informal leaders in GBAO, starting with Mamadboqirov, have now either been arrested or executed in a series of police operations.

The highest number of civilian casualties occurred in the town of Rushon, also known as Vamar, a center of the Rushon district located along the road from Dushanbe to Khorugh.

On May 17, a group of residents from Vamar attempted to hold back a military column that was moving to the provincial center.

In response, the army and police opened fire on the crowd, killing dozens. Some who escaped were reportedly shot at from helicopters.

According to the human rights group ADC Memorial, about 40 civilians were killed in the unrest, though many corpses were reportedly thrown into the Panj River.

Anora Sarkorova, a Tajik journalist living in Europe, wrote on Facebook that “Vamar is like Bucha [the town in Ukraine where Russian soldiers are accused of killing civilians]. Corpses everywhere. They’re looking for people. They take them to police stations and the State Committee for National Security and beat them to death.”

Based on the testimony of local witnesses and civic activists, several international human rights organizations, including ADC Memorial, Civil Rights Defenders, Amnesty International, the Norwegian Helsinki Committee, and the World Organization Against Torture, have accused Tajik authorities of blatantly violating basic human rights in Khorugh and Vamar, where cases of the torture of detainees, kidnapping, looting, and the extrajudicial execution of civilians have been reported.

Human rights activists have also called for a thorough investigation into the use of force and the circumstances that led to the deaths and injuries of civilians during the protests in November and May, and for a public report to be made.

The escalating violence in the region also sparked a call for restraint from UN Secretary-General Antonio Guterres.

The European Union’s diplomatic mission in Dushanbe and the French, German, British, and U.S. embassies have expressed their concern about the rights situation in GBAO and called for both sides to peacefully resolve the conflict.

To justify Tajikistan’s brutal policy in GBAO, officials began a large-scale media campaign intended to present the crackdown on the protest movement as an “anti-terrorist operation against armed criminal groups and international terrorists.”

Members of the protest movement reject the government’s accusations.

“It was a peaceful protest. If we had weapons or if it had been a military uprising, the Tajik Army and police would have suffered severe losses,” said an activist on condition of anonymity. “But they lost only one soldier and, according to our sources, it was an accidental shooting death.”

As part of the media campaign, officials accused Ulfatkhonim Mamadshoeva, a well-known Tajik journalist and human rights defender, of organizing violent disturbances with several informal GBAO leaders and Tajik oppositionists living abroad, which they said were funded by an unnamed foreign country.

Mamadshoeva and her husband, Kholbash Kholbashov, were shown on state TV on May 24 allegedly confessing to the charges, in an action condemned by rights groups. One week earlier, a day before she was detained, Mamadshoeva told RFE/RL that she had nothing to do with any of the anti-government protests.

The Tajik government also went to great efforts to prevent the dissemination of information or video from eyewitnesses of alleged rights violations in GBAO.

According to well-known Tajik blogger Rustami Joni, security forces broke into people’s homes in the Rushon district and Khorugh to check phones and cameras for video and photos of alleged rights abuses committed by law enforcement.

Tajik media outlets were also instructed not to cover events in GBAO under threat of closure. In mid-May, Asia-Plus, the largest Tajik independent media outlet, announced it was ceasing coverage of GBAO after receiving an official warning from the prosecutor-general.

Members of the Pamiri community complain that security officers detain residents of GBAO upon arrival at Dushanbe airport where they are searched and interrogated. And Sarkorova said officials have increased pressure on the Pamiri diaspora in Russia, with activists and bloggers from GBAO living in Russia receiving text messages from Tajik security services urging them to return to Tajikistan for a security check to ensure they weren’t involved in anti-state or criminal activity.

Many Tajik observers say the country is at a turning point in its development.

“It is not only about GBAO and suppressing a local protest movement,” said one analyst in Dushanbe, who spoke to RFE/RL on condition of anonymity. “Badakhshan is only the first step, a kind of testing ground for a complete crackdown on civil society and the eradication of all kinds of potential dissidents. Soon, the government will apply the same methodology…throughout the country.

He pointed to a recent series of arrests, attacks, and harassment of several well-known bloggers and journalists in Dushanbe as proof of this.

On May 17, unidentified people in plain clothes attacked four Tajik journalists from RFE/RL’s Tajik Service and Current Time TV, a Russian-language outlet led by RFE/RL in cooperation with VOA, that attempted to get an interview with Mamadshoeva.

In June, the Tajik public was angered by the detention of Daleri Emomali and Abdullo Ghurbati — two popular bloggers/journalists known for reports critical of authorities. Human Rights Watch demanded on June 22 that Tajik officials release the two bloggers.

But they weren’t the only ones detained.

“The people of Pamir will never be the same as they were before the conflict,” said Joni, who lives in self-exile.